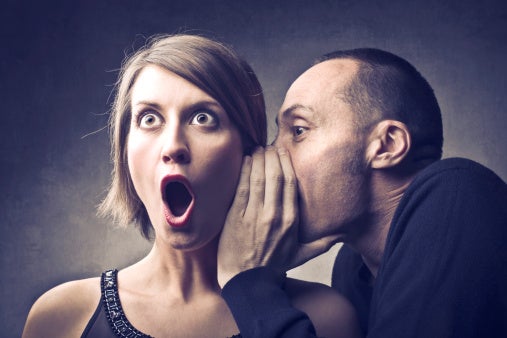 Here’s more proof that managers (and executives) need to keep their opinions to themselves and just stick to the facts when disciplining employees. Otherwise, they could create a path for employees to sue.
Case in point: While Rochelly Baez worked as the East Coast regional manager for Anne Fontaine USA Inc. (AFUSA), a clothing retailer, some of her co-workers started a rumor about her.
According to the rumor, Baez had worn a revealing shirt with no bra at a meeting she had with Ari Zlotkin, the company’s president and CEO, thereby showing him her breasts.
Baez reported the rumor to the company’s controller/HR rep to get it to stop. The controller looked into the situation and deemed written warnings weren’t necessary for those spreading the rumors. Instead, the controller recommended that Baez rethink her choices in clothing.
Court documents indicate that quite a bit of workplace “drama” surrounded these incidents.
To recap: So far, we have a potentially hurtful rumor being spread around the workplace, and an employee complaint about being subjected to harassment/a hostile work environment. Not to mention a lot of “drama.”

Performance was also a problem

Also surrounding these events were some pretty serious performance problems for Baez. In fact, prior to Baez reporting the rumor, AFUSA had already started looking to replace her.
Three months prior to the complaint by Baez, AFUSA had offered Baez’s position to someone else, who declined the offer.
A little more than a month following Baez’s complaint, she was fired. In a meeting with Zlotkin, he gave three reasons for Baez’s termination:

Baez filed a lawsuit against the company, claiming she was illegally fired in retaliation for her complaint.
She said she wouldn’t have been fired if she’d never complained about the rumor, which amounted to a violation of Title VII of the Civil Rights Act.
AFUSA fought to get her lawsuit dismissed, claiming it lacked merit. But it was unsuccessful. The court said her lawsuit should proceed to trial.
Now, AFUSA is starring at an expensive legal battle or settlement.
What crippled AFUSA’s case? The CEO’s comments about Baez creating “too much drama,” combined with the close proximity between her complaint and her firing.
The court said those two issues, when combined, created a genuine question as to whether or not Baez would have been fired if she’d never lodged the complaint. A jury must now answer that question.
Courts have long said that the close proximity between a complaint and a firing, without some other evidence of retaliation, usually isn’t enough upon which an employee like Baez can build a retaliation lawsuit. This is especially true when a company’s already shown it was in the process of terminating/replacing the employee before his/her initial complaint.
But the manager’s “drama” comment provided the additional evidence necessary to call into question the company’s true motives. So Baez’s case will move on. And even if AFUSA is able to convince a jury it had no retaliatory intent when it fired Baez, it’ll have paid a pretty penny in legal fees to get to that point.

This case is more proof that managers and higher-ups need to stick to the facts during termination proceedings and performance reviews.
When pressed in court, employers need to be able to show that they made objective decisions.
Subjective comments — like saying someone has created “too much drama” — tend to only pave the way for discrimination, harassment or retaliation claims.
Cite: Baez v. Anne Fontaine USA Inc.