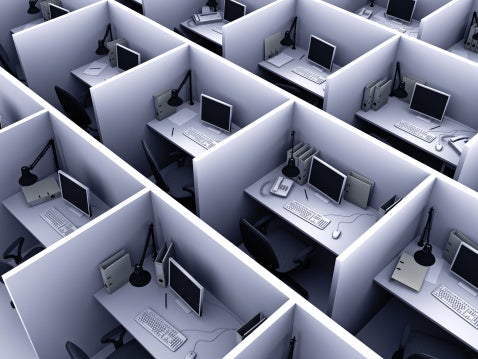 A company without bosses — where employees instinctively step up to take on new tasks, and innovation is sparked through the natural creativity created by teamwork. Really?

We’ve been reading recently about how online apparel retailer Zappos has embarked on a plan to “structure the company around the work that needs to be done rather than the people who do it,” in the words of Marcus Wohlsen, writing on Wired.com.
That means doing away with the title of “manager.” The system, called a “holacracy” (more on that in a second) would discard the traditional supervisor/manager structure with overlappping and autonomous circles, each dealing with specific tasks and responsibilities.
Yeah, we’re not quite sure what that means, either.
But here’s how Jena McGregor described the setup in a recent Washington Post story:

At its core, a holacracy aims to organize a company around the work that needs to be done instead of around the people who do it. As a result, employees do not have job titles. They are typically assigned to several roles that have explicit expectations. Rather than working on a single team, employees are usually part of multiple circles that each perform certain functions.
In addition, there are no managers in the classically defined sense. Instead, there are people known as “lead links” who have the ability to assign employees to roles or remove them from them, but who are not in a position to actually tell people what to do. Decisions about what each role entails and how various teams should function are instead made by a governing process of people from each circle. However … at Zappos the broadest circles can to some extent tell sub-groups what they’re accountable for doing.

McGregor quotes Zappos spokesperson John Bunch as saying the company is “decoupling the professional development side of the business from the technical getting-the-work-done side.” And Bunch said that while the system sweeps out traditional leadership titles, the company hopes new leaders will emerge as time goes on.

The Zappos plan begs the question: Exactly what’s wrong with the traditional manager/worker structure? In his Wired story, Wohlsen quotes Zappos’ Alexis Gonzalez-Black as saying it all comes down to time wasted on office politics — today’s companies have “rigid structures (that) pull people apart from one another. The goal of shared success becomes subsumed by politics. ‘Work becomes more about negotiating power and systems of power than about the actual work,’ Gonzales-Black says.”
Gonzalez-Black admits that the whole hiring/firing, setting-compensation-levels thing could be a puzzler (she calls those issues “works in progress”). But overall, she thinks “(Holacracy) allows us to rapidly evolve the structure of the organization to react to real world conditions,” she says. “It is definitely going to put us in a place where we’re much more agile.”

Where it all began

So where’d this holacracy concept come from? According to Wohlsen, “Holacracy was developed inside an obscure Pennsylvania software startup founded by a man named Brian Robertson, but it’s slowly spreading elsewhere. The holacracy name is now a registered trademark, and Robertson has gone to create an consultant shop, HolacracyOne, that helps other companies adopt the system.”
According to Robertson’s website, holacracy operates on several basic levels:

We have met the problem, and it is us

Luddites though we may be, we’re certainly not convinced that the traditional manager/employee relationship is perfect. But what makes it imperfect isn’t structure, it’s the behavior of human beings.
Ah, those wacky humans.
Is it really possible that flattening out your workforce will eliminate all those irritating personality quirks that plague managers, co-workers and HR day in and day out? Will being in a “circle” devoted to a certain part of the operation erase competition and jealousy among team members?
Utopian as it appears, we’re afraid that holacracy is unlikely to work — mostly because hierarchies are simply part of the human experience. We agree with Stanford business professor Bob Sutton, who’s quoted in the Post article: “Show me any group of five human beings or five apes or five dogs, and I want to see the one where a status difference does not emerge. It’s who we are as creatures.”
Sutton concurs that it’s a good idea to remove as much friction and internal competition as possible, but “creating situations where you’re clear who has decision authority is important.” Without that, he says, “you get more politics.”
And one more thing: Those governance and operations and tactical meetings don’t exactly inspire confidence that a holacracy is going to be any more efficient (at least meetings-wise) than those tired old staff sessions we have now.