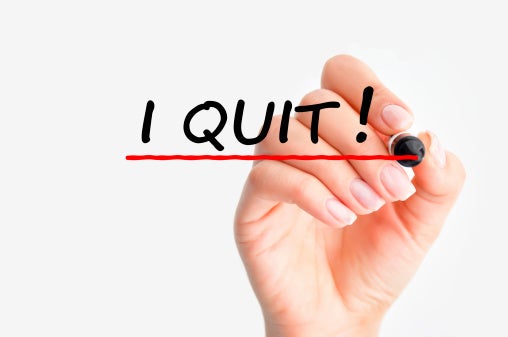 If anybody understands how bizarre human behavior can be, it’s HR pros. So for your entertainment, here’s a compilation of head-scratchers from the “I Quit” archives.
Make no mistake, there’s a price to pay for quitting a job in a disruptive way, according to a recent OfficeTeam survey.
OfficeTeam, a leading staffing service, put this question to HR managers: “In your opinion, how does the manner in which someone quits a job affect that person’s future career opportunities?” Nearly nine of 10 (86%) said it either “greatly” or “somewhat” affected the departing employee’s future prospects.
Apparently, there’s a group of workers (perhaps they’re now former workers) who didn’t care about possible consequences. The researchers asked the HR managers to recount the most unusual way they’ve heard of someone quitting. Some of their responses:

Some workers went high-tech with their resignations:

A few employees had someone else do their dirty work:

Others did a disappearing act:

And one worker took a more direct approach: “He just stood up and said, ‘I quit.'”
OK, your turn: Send us the strangest ways you’ve seen workers exit your employ.