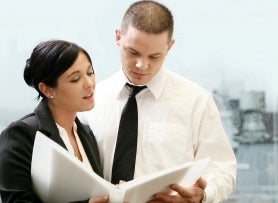 All along, employers have come to believe that they must issue a written Election Notice to COBRA-eligible employees to let them know their rights under the law. But apparently, that’s not the case at all.

The U.S. District Court for the Northern District of Illinois just ruled in a lawsuit filed by a terminated worker against her former employer that:

the [COBRA] statute does not specify the form the [Election] notice must take.

This ruling is sure to open more than a few eyes nationwide.

Here’s a brief rundown of what happened.
Elisa Madonia was a customer service representative for real estate management firm S 37 Management, Inc. when she was diagnosed with stage III esophageal cancer.
Madonia requested that her employer allow her to work a four-day workweek while she underwent chemotherapy and radiation treatment. Madonia requested she be granted this flexibility as a reasonable accommodation under the Americans with Disabilities Act (ADA).
The employer refused her accommodation request and terminated her.
Following her termination, S 37 Management presented Madonia with a separation agreement, which would release the employer from all of Madonia’s employment-related legal claims in exchange for the company paying all of her COBRA premiums.
At that time, Madonia was told her insurance coverage would be cancelled if a check for her premiums wasn’t immediately tendered to the insurer. Madonia apparently paid the premiums herself to keep her coverage from lapsing, as the court noted she refused to sign the agreement but “accepted her right to continue her medical coverage.”
She then sued S 37 Management claiming, among other ADA allegations (we’ll get to those in a minute), the employer failed to provide her with a COBRA Election Notice.

The company fought to get all of Madonia’s claims dismissed, and it was successful in doing so.
When it came to her COBRA claims, the court ruled she had two things working against her:

The first point, however, is obviously the big kahuna for employers.
Following the ruling, we here at HR Morning did a double-take ourselves. But sure enough, a review of the Department of Labor’s (DOL) COBRA guidance confirmed it: Nowhere does the guidance actually say the COBRA Election Notice must be provided in written form.
Here’s the relevant portion of the DOL’s guidance:

COBRA Election Notice – After receiving a notice of a qualifying event, the plan must provide the qualified beneficiaries with an election notice, which describes their rights to continuation coverage and how to make an election. The election notice must be provided to the qualified beneficiaries within 14 days after the plan administrator receives the notice of a qualifying event.

The election notice should include:

Now, of course, it would be hard to provide all of the info the DOL lists in its guidance verbally. But it can be done — and apparently, that’s acceptable.

Unfortunately, the court in this case didn’t dive into what exactly Madonia was told when S 37 Management satisfied the COBRA notice requirement.

Other COBRA regs not discussed

The court also appears to have overlooked two other important requirements under COBRA in this case:

Perhaps the court felt none of these factors were relevant given that it had determined no COBRA qualifying event had actually taken place.

Now let’s get to Madonia’s ADA allegations.
She claimed she was illegally terminated and was a victim of disability discrimination because S 37 Management failed to accommodate her disability under the ADA.
The court, however, threw her ADA claims out, saying she failed to prove that she was an individual qualified to receive the ADA’s protections.
It said to be a qualified individual under the ADA, Madonia had to show that she had a disability and that she could perform the essential functions of her job with or without a reasonable accommodation.
While there was no doubt she had a disability, the court ruled she failed to show she could perform the essential functions of her job under the four-day workweek she requested.
Case closed.
Cite: Madonia v. S 37 Management, Inc.