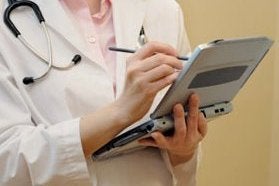 Here’s a tricky case: An employee is clearly disabled but can still perform her work. Still, she requests an accommodation anyway. Her doctor’s silent on the issue. Should she get one?

The answer: Maybe, maybe not — but you still have to enter the interactive process to determine if it’s possible to provide her with a reasonable accommodation.
That was takeaway of an appellate court ruling in Margaret Pascale’s discrimination lawsuit against her employer the Erie County Department of Social Services.
Here’s what happened.
In a cost-saving move, the county decided to take employee’s personal desktop printers away in favor of common-use, network printers that employees had to share.
Pascale was one of the employees who lost her printer. The problem was she only had one leg, having had one amputated below the knee as a result of complications with diabetes.
There was little doubt that Pascale would be considered disabled under the Americans with Disabilities Act (ADA). And as a result of losing her personal printer, she claims she was forced to leave her desk “constantly” to obtain printouts.
This, she claimed, was “very tiring” and “may cause added soreness to [her] situation.”

Wanted her own printer

As a result, she requested that she be allowed to have a personal printer as a reasonable accommodation for her disability.
She provided her employer with a medical certification from her doctor that said she was disabled due to her diabetes-related amputation and suffered from “weak knees” and “chronic back pain.”
What the certification didn’t say, however, was anything about her needing an accommodation at work.
As a result, the county denied her request.
Pascale then filed a discrimination complaint with the New York State Division of Human Rights.
The county defended it’s position saying because the doctor’s certification didn’t mention anything about an accommodation, it wasn’t required to provide one.
But an administrative law judge and, later, an appellate court said that argument didn’t hold water.
Doctor’s note or no doctor’s note, an employer is still obligated to determine if a reasonable accommodation exists that would help a disabled individual complete the essential functions of his or her job, the court ruled.
The county also erred by not failing to evaluate whether providing Pascale with her own printer would even create an undue hardship, according to the court.
So, essentially, the court said the county failed to enter the interactive process, and thus committed an act of discrimination.
The penalty? Because Pascale wasn’t terminated and remains in her job, the appellate court awarded her a modest (at least compared to other ADA penalties) $2,500, and it levied a $5,000 civil penalty against the county.
The county was also required to provide Pascale with her own personal printer.
Cite: Matter of County of Erie v. New York State Division of Human Rights (PDF)