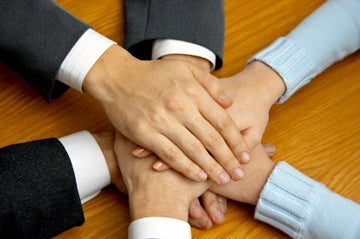 Was there really ever a time when people felt loyal to their employers? And is loyalty actually what you’re looking for?
Everybody’s heard the talk about how loyalty has vanished from the employment relationship — on both sides. Back in the day, the narrative goes, employers treated workers like family, and there was a bond between management and workers that went beyond day-to-day productivity.
In a recent post on Knowledge@Wharton, the blog of the Wharton School of Business at the University of Pennsylvania, several professors commented on the state of employee attitudes today.
Management professor Adam Cobb says it’s all about the power:
“When you are talking about loyalty in the workplace, you have to think about it as a reciprocal exchange,” he says. “My loyalty to the firm is contingent on my firm’s loyalty to me.
“But there is one party in that exchange which has tremendously more power, and that is the firm.”
Cobb sees the 1980s as the beginning of the end for worker loyalty: “You started to see healthy firms laying off workers, mainly for shareholder value.” Health insurance costs started to be shifted to employees; pension funds shuttered in favor of 401(k) plans.
“The trend was toward having the risks be borne by workers instead of firms,” Cobb said. “If I’m an employee, that’s a signal to me that I’m not going to let firms control my career.”
Where does their loyalty really lie?
Management professor Matthew Bidwill notes that “there is less a sense that your organization is going to look after you in the way that it used to — which would lead you to expect a reduction in loyalty as well.”
But here’s where he veers off the traditional view: Bidwill’s not sure employees were ever all that loyal to their organizations, no matter what the economic climate.
“Employees are often more loyal to those around them — their manager, their colleagues, maybe their clients. These employees have a sense of professionalism — and loyalty — that relates to the work they do more than to the company.”
Bingo: There’s the opportunity for employers to strengthen their relationship with workers.
Loyalty vs. engagement
It’s pretty clear: In today’s workplace, loyalty and engagement are two different things.
Study after study has shown what makes people stay with their current employer. A checklist:

Loyalty doesn’t seem to play a very big role on that wish list.
What your managers can do
There’s certainly no dearth of opinions about how managers motivate, nurture and reward employees — and make them want to stick around.
But many of these theories stress the nuts and bolts of manager behavior – as in, “you need to praise at least three employees in your department every day.”
That approach tends to overlook the key issue: What do employees want from their job on an emotional level?
Here’s a rundown of the things the experts say resonate most with employees — and make them want to stick around: