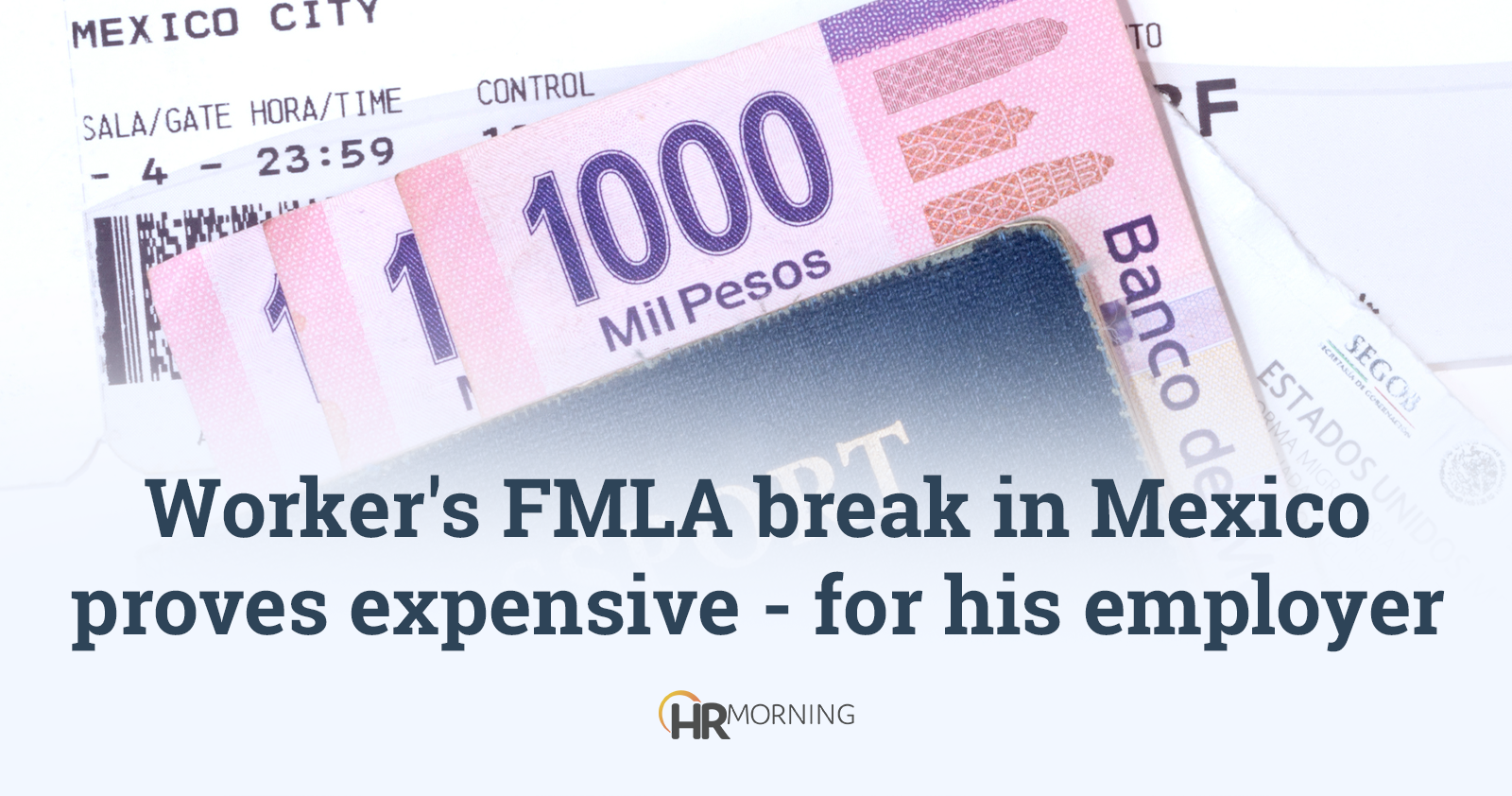 Any HR pro would raise an eyebrow reading the broad outline of this FMLA abuse investigation.

An employee schedules a knee surgery, then postpones that procedure to have a different operation done to remove a tumor on his foot.

While he’s out on FMLA leave, the employee takes a vacation trip to Mexico. After he gets back, he lets the employer know he might soon request additional FMLA leave to have the postponed surgery on his knee.

Already annoyed about the possible follow-on leave request, the employer finds out about the vacation, investigates possible FMLA abuse and sees a video of the employee lifting luggage out of a car.

In spite of the employee’s argument that his activities on vacation complied with doctor’s orders, the employer fires him for FMLA abuse.

Seem pretty clear cut? The employer thought so and decided not to settle when the employee sued for retaliatory termination under FMLA, ADA and Massachusetts discrimination law.

In the end, however, a jury heard a more detailed version of the story and awarded the fired employee more than a million dollars in damages.

Appeals went all the way to the Massachusetts Supreme Judicial Court, where judges upheld essentially all of the huge (DaPrato v. Massachusetts Water Resources Authority).

The court’s agreement with the original jury decision provides a valuable reminder that FMLA investigations and related employment decisions need to be thorough, carefully documented and conducted calmly based on facts rather than emotion.

What the employer got wrong

Of course, employers have the right to terminate an FMLA abuser. And even if it gets to court, many organizations successfully fend off claims of interference and/or retaliation.

So, why did this employer miss so badly in deciding that the employee had abused FMLA leave and deserved to be fired?

First of all, the employer got some basics wrong.

The HR director told the court that she believed an employee out on FMLA could not take a vacation during their leave.

The court made it clear that there is no prohibition against someone recovering anywhere he or she wants to during medically-approved leave.

But, the court said, “an employer may validly consider an employee’s conduct on vacation – or, for that matter, anywhere – that is inconsistent with his or her claimed reasons for medical leave, when the employer has such information at the time the employer is evaluating whether leave has been properly or improperly used.”

The employee said his conduct wasn’t inconsistent with his doctor’s instructions, which said he needed six to eight weeks of FMLA , should wear a walking boot and needed to avoid putting a lot of weight on his foot for a period.

He was following those instructions, he said – wearing the boot and being very careful not to put excessive weight on his foot.

And the court agreed. The Massachusetts Supreme Judicial Court’s decision noted: “An employee recovering from a leg injury may sit with his or her leg raised by the while fully complying with FMLA leave requirements but may not climb Machu Picchu without abusing the FMLA process. Careful consideration of the reasons for the medical leave and the activities undertaken, including the timeline for rehabilitation and recovery, are required to determine whether FMLA leave has been abused.”

When HR recommended he should be fired for FMLA abuse, however, it didn’t consider those factors. Nor did HR share that information with senior management.

Since the employer ignored the plaintiff’s medical records and FMLA application, the trial court said, the decision to fire the employee was instead based on “shock, outrage and offense” because the employee indicated he might request more FMLA leave for knee surgery.

And the evidence that the decision was actually driven by emotion came directly from HR’s emails.

The employee asked for a copy of the organization’s salary continuation policy in case he needed it when deciding about requesting leave for the planned knee surgery.

The HR director didn’t provide a copy of the policy. Instead, she forwarded the request to an HR manager with a note asking, “Is he serious?” The HR manager replied, “OMG.”

Later that day, the HR director launched the FMLA investigation.

The Massachusetts Supreme Judicial Court upheld the jury award in the original case – $206,000 for back pay and lost future income and benefits, $200,000 for emotional distress and $715,385 in punitive damages. It also let stand the trial court’s award of $634,133 in liquidated damages and attorney fees.

In the end, the company learned a series of very expensive lessons. Make sure employment actions, especially around FMLA, are based on clear facts rather than emotion. Review all documentation carefully when weighing an employee’s version of events. And remind all your execs and managers about the risk that careless communication might later resurface in court.

One final caution that might help other HR pros from hurting their case if they end up in court over an FMLA abuse claim – no time travel allowed.

The employer tried to back up its FMLA abuse claim using photos of the employee in Mexico standing and holding a large fish. But, the court noted, it only got ahold of those pictures AFTER it fired the employee, so it couldn’t have used them as part of its decision making.