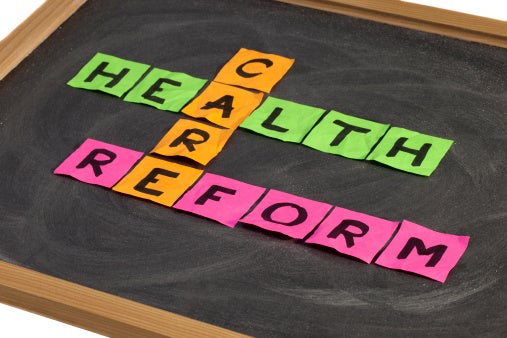 Few Republicans have put a time frame on how long it could take to completely repeal the Affordable Care Act (ACA) – but one just did.
At the National Association of Health Underwriters’ annual legislative conference in Washington DC, legislators offered the more than 1,000 insurance agents gathered for the event some details and answers that had been lacking up until to this point on the repeal of Obamacare.
The most eye-opening revelation came from Sen. Lamar Alexander (R-TN), the chairman of the Senate’s Committee on Health, Education, Labor and Pension, according to a report by Employee Benefit Adviser.

‘Americans deserve a repeal, but …’

Alexander said the full change (aka, ACA repeal) and implementation of it will take up to six years, and only after “concrete alternatives” are created because “Americans deserve to have it repealed, but it needs to be done the right way.”
Despite the lengthy process of the ACA repeal — or revision — project, Alexander did make it clear that Republicans planned on getting to work immediately to do away with the more controversial and administratively onerous provisions of the ACA.

‘Not going to do anything stupid’

Rep. Chris Collins (R-NY) echoed Alexander’s sentiments about not rushing the repeal process by stating, “We are not going to do anything stupid. We are not going to leave people out to dry.”
Collins also acknowledged the formidable challenge of repealing and replacing such a significant piece of legislation by stating:

“It is not easy. We are not going to do something … not well thought out or [that] has unintended consequences.”

While the GOP was offering the healthcare industry some insight into the future of the repeal efforts, the IRS was quietly scaling back its own enforcement efforts.
In fact, the agency recently announced it will be accepting individuals’ tax returns regardless of whether or not those taxpayers filled out the line on their tax returns indicating if they had maintained qualifying health coverage for the 2016 plan year.
Specifically, with very few exceptions, individuals were required to indicate whether they had maintained coverage in 2016 or paid the penalty by filling out line 61 on their Form 1040s. And the IRS previously said if line 61 wasn’t completed, it would label the 1040 a “silent return” and reject it.
Now, however, the IRS appears to have had a change of heart and said the line will be optional for 2016 tax filers.
Why the about-face? Trump’s executive order on the ACA seems to have been the direct cause of the change in enforcement.
According to Reason, the IRS said:

“The recent executive order directed federal agencies to exercise authority and discretion available to them to reduce potential burden. Consistent with that, the IRS has decided to make changes that would continue to allow electronic and paper returns to be accepted for process in instances where a taxpayer doesn’t indicate their coverage status.”

As employers know, the requirement that all Americans maintain qualifying health coverage — aka the individual mandate — is one of the cornerstones of the ACA.
So that begs the question: If the feds are relaxing the enforcement of the individual mandate, will they do the same with employers’ ACA reporting requirements?
As of right now, the answer is “no.” But we’re following ACA developments very closely, and we’ll keep you posted.
Info: A tip of that hat goes to our sister website HR Benefits Alert, which posted a version of this story previously.