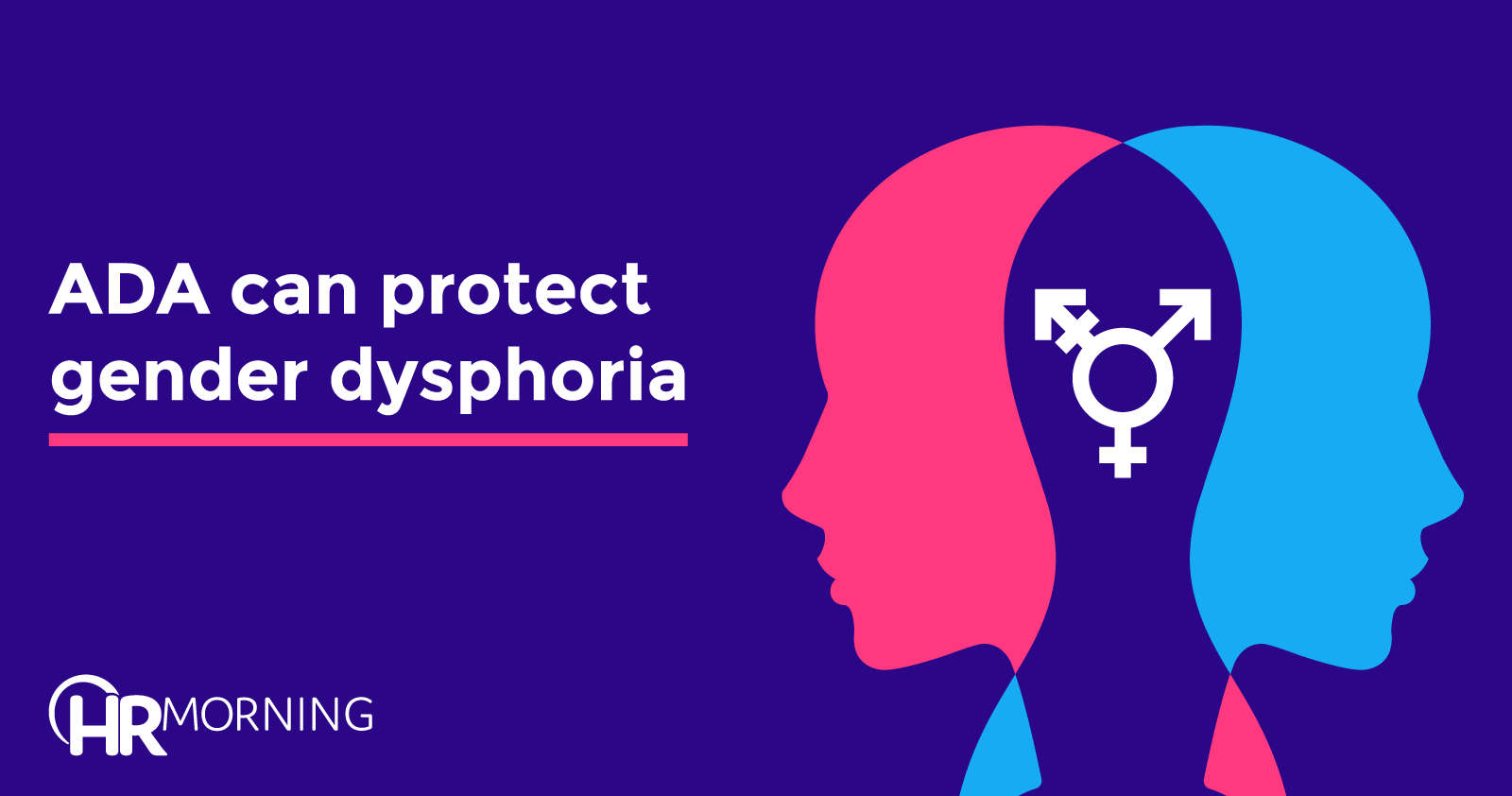 A new federal court ruling has opened the door to greatly expanded protections for people with gender dysphoria under the ADA. And even though the case does not involve an employment-related dispute, it has clear and significant implications for employers and HR pros.

The court’s finding that gender dysphoria can be an ADA disability in the case of a prisoner challenging the conditions of her confinement applies with equal force to the statute’s employment provisions. This is because establishing the existence of an ADA-qualifying disability is a preliminary hurdle that plaintiffs must clear in ADA cases – regardless of the context in which unlawful bias is being alleged.

So if gender dysphoria can be a disability for a prisoner who is challenging conditions of confinement, it can just as easily be a disability for a job applicant or employee. And that means employers and HR pros must be aware that the full panoply of protections afforded under the ADA are now much more likely to be available to people with gender dysphoria – and are definitively afforded to them in the states covered by this ruling (Maryland, North Carolina, South Carolina, Virginia and West Virginia).

Kesha Williams is a transgender woman with gender dysphoria. Before she began a six-month period of incarceration at the Fairfax County Detention Center, she had changed her legal name and began living her life as a woman. Her home state of Maryland had recognized her gender as female, and it had issued her a driver’s license showing that designation.

When Williams was first incarcerated, prison deputies assigned her to the women’s housing side of the facility. They also gave her uniforms that were typically provided to female inmates.

Things changed after a prison nurse conducted a preliminary medical evaluation. Williams told the nurse that she is transgender and has gender dysphoria. She also mentioned that she had received hormone treatment for her gender dysphoria for 15 years.

Because Williams retained the genitalia she was born with, the nurse labelled her a “male” and changed her records and housing assignment to the male population. In doing so, the nurse acted pursuant to prison policy, which said that “[m]ale inmates shall be classified as such if they have male genitals.”

Williams says things went downhill from there. She did not get timely access to her prescribed hormone medication, she alleges, and she was repeatedly harassed by prison deputies and male inmates. She also says deputies ignored her request to be searched by a female deputy rather than a male.

After she was released, Williams sued the nurse and other prison officials. Among other things, she asserted violations of the ADA.

When the defendants filed a motion to dismiss, the trial court agreed with them that Williams’ ADA claims could not proceed because gender dysphoria is not a disability under the statute. To reach this conclusion, it relied on an ADA provision that specifically excludes from the definition of disability “gender identity disorders not resulting from physical impairments.”

Williams appealed, pressing forward with two distinct arguments. First, she insisted that gender dysphoria is not a gender identity disorder. And second, she argued that even if it is, the statutory exclusion does not apply because it results from a physical impairment.

In a 2-1 ruling, a panel of the U.S. Court of Appeals for the Fourth Circuit said these arguments were strong enough to enable Williams to avoid dismissal of her suit.

Preliminarily, it explained that the ADA’s definition of disability is to be broadly construed, and that the statute’s exclusions are to be read narrowly.

There has been “a significant shift in medical understanding” since the ADA was passed, the court said, and “as a matter of statutory construction, gender dysphoria is not a gender identity disorder.”

The two-judge majority further concluded that Williams has sufficiently alleged that her gender dysphoria results from a physical impairment, providing an independent basis for the conclusion that her condition does not fall within the ADA’s statutory exclusion. The court thus reversed the lower court’s decision to reject Williams’ ADA claims and remanded the case for further proceedings.

This is the first federal appeals court ruling to address the question of whether the ADA’s exclusion of gender identity disorders from the definition of disability applies to people with gender dysphoria. Before it, lower courts had delivered mixed results on the question. At least one federal district court ruling favored a broader interpretation that is consistent with this new ruling, while at least one other went in the opposite direction.

A big win for many

The EEOC has pursued a fair amount of litigation to protect people from discrimination based on their transgender status — but under Title VII rather than the ADA. This ruling could signal new enforcement efforts that invoke the ADA as well.

Even in other jurisdictions, the ruling provides strong support for the argument that gender dysphoria can be a covered disability under the ADA. Employers must be aware that the class of individuals to whom the full range of ADA protections are owed now is much more likely to include those with gender dysphoria.

Best practice: Don’t assume gender dysphoria cannot be a disability under the ADA. Instead, avoid discrimination based on gender dysphoria, and be prepared to fully evaluate related requests for job accommodation.

The key takeaway for HR is that gender dysphoria may be a protected disability under the Americans with Disabilities Act (ADA). Gender dysphoria is experienced by some – but not all – people who identify as transgender, non-binary, intersex, and genderfluid: about 1 in 35 Americans.

According to the DSM-V, Gender Dysphoria is psychological distress from incongruence between someone’s sex assigned at birth and their gender identity and ranges from light to severe symptoms. Severe or ongoing psychological distress can manifest at work as depression, anxiety, or a range of physical symptoms, and result in co-occurring issues such as PTSS, PTSD, or substance abuse.

We encourage companies and HR teams to treat gender dysphoria accommodation requests with the same care as requests related to other mental health disorders, and follow ADA guidance for mental health to ensure all employees can benefit from an inclusive workplace.