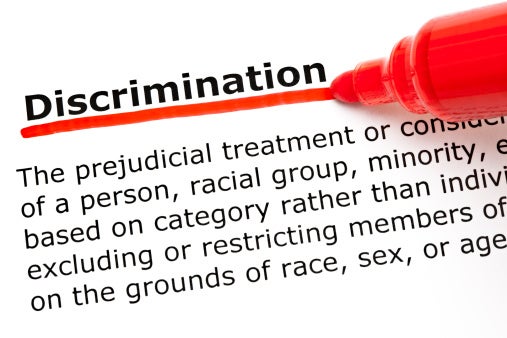 Excluding a certain type of coverage from your company’s health plan has officially become risky business — even though it’s possible the same couldn’t have been said about this exclusion a few years ago.
What kind of coverage are we talking about? Coverage for gender transition or sex transformation procedures.
In recent years, the rights of lesbian, gay, bisexual and transgender (LGBT) individuals have made front-page headlines. The EEOC has even made it a big point of emphasis this past year to litigate against employers it believes are discriminating against individuals based on their sexual orientation.
The agency has said sexual orientation bias has been a form of sex/gender discrimination that’s been banned by Title VII of the Civil Rights Act since at least 2013.
So when the case of Josef Robinson came before the EEOC, the agency jumped all over it.
This is one lawsuit employers need to pay close attention to because it may affect company-sponsored health plans everywhere.

Josef Robinson is an operating room nurse for Dignity Health’s Chandler Regional Medical Center in Arizona.
Robinson was born a woman and now identifies as a man. He underwent medical procedures as part of his transition from female to male.
Dignity Health’s medical plan excludes all coverage related to “sex transformation surgery,” therefore Robinson incurred a lot of out-of-pocket medical costs for his procedures.
As a result, Robinson filed a sex discrimination charge with the EEOC. It alleged Dignity Health was guilty of gender discrimination because its health plan treated transgender employees differently from other employees.
After looking into Robinson’s claims, the EEOC issued him a right-to-sue letter, a step necessary for Robinson’s claims to have their day in court.
Robinson then took his case to the American Civil Liberties Union (ACLU), which sued Dignity Health on Robinson’s behalf to get that day in court.

Feds continue to back claims

Shortly after the lawsuit was filed, the EEOC issued an amicus brief with the U.S. District Court of the Northern District of California in support of the suit.
Dignity Health says the exclusion in its health plans wasn’t discriminatory because it applied to all of its employees equally. But the ACLU and the EEOC claim the exclusion violated Title VII because it really only affected transgender individuals.
The lawsuit is pending, so it may be a while before we know whose argument the court favors.
To date, there’s been some split between courts that have heard similar lawsuits in which plaintiffs have tried to extend Title VII’s protections to transgender individuals.
The issue that always comes up in these cases is the fact that Title VII doesn’t specifically carve out protections for transgender or LGBT individuals. But the EEOC says those individuals are covered under the sex/gender discrimination protections of the law — because transgender discrimination is, by default, sex discrimination
One thing we do know: No matter whose side the court takes in Robinson’s lawsuit, the EEOC has made it clear that it’ll continue to challenge plans with exclusions similar to the one in Dignity Health’s plan.
So employers have to decide if having such an exclusion in their plans is worth the legal liability it potentially exposes them to.
Cite: Robinson v. Dignity Health