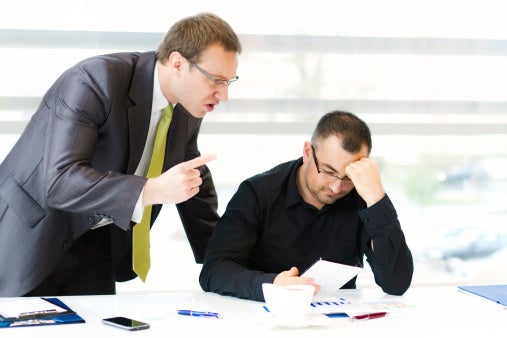 A lot’s been written about how much a bad hire (one you terminate and replace quickly) costs companies. But a group of researchers has taken that concept a bit further — examining how much letting a toxic employee stick around costs employers.
The answer? The estimated savings from firing (or avoiding the hire of) a toxic employee is $12,489. And that figure only factors in the person’s “induced turnover” cost — or the expense of replacing additional workers lost as a result of having the toxic worker on their team.
For the purposes of this new research, a “toxic” employee was defined as someone who commits an egregious violation of company policy — examples include sexual harassment, workplace violence, falsifying documents, fraud and/or general workplace misconduct.
What the cost estimate didn’t take into account is the potential cost of legal problems, regulatory penalties or reduced employee moral from keeping a toxic employee on staff.
This data comes from a Harvard Business School working paper, entitled “Toxic Workers,” for which the authors, Dylan Minor, a visiting assistant professor at the school, and Michael Housman, a workforce scientist in residence at hiQ Labs, analyzed the organizational performance of more than 50,000 employees from 11 companies.

As interesting as that cost figure might be to employers, this finding may be the most head-turning from Minor and Housman’s research: The cost savings from dumping a toxic hire is more than double the monetary gain of making a stellar new hire.
Their research concluded that employers receive a monetary gain by hiring a stellar worker of $5,303 over and above what an average worker would produce.
Bottom line: “… avoiding a toxic worker (or converting them to an average worker) provides more benefit than finding and retaining a superstar,” Minor and Housman said.

Their research also found that your most toxic employees can also be some of the most productive in terms of their own output. This is the reason they’re hired in the first place and are able to stick around.
But Minor and Housman said, “This performance finding suggests that toxic workers are similar to what Jack Welch described as ‘Type 4’ workers — those who deliver on the numbers but do not have the right values.”
They then pointed out that Welch preached the need to remove these workers, despite the difficulty in doing so because of their productivity.
Minor and Housman went on to cite other research, published by the Harvard Business Review, which found a policy that removed “big shots” and “tyrants” seems to lead to a more productive organization in general — due to the uplifting effect removing toxic workers would have on the rest of the workforce.