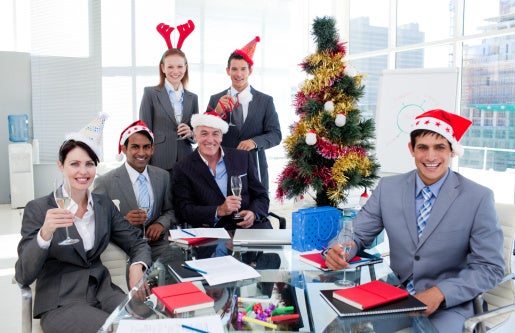 Here come the holiday gatherings, a chance to celebrate the year’s accomplishments, let the folks know you appreciate all their hard work … and do your best to keep a lid on things as the party rolls along.
First the good news.
According to a recent survey conducted by Chicago-based ad agency Third Coast Digital, respondents who work in HR were the most likely to say that they try to limit the amount they drink at holiday work parties. In the days before Uber, we would have known to ask you guys for a ride home.
But other findings are likely to make any HR pro wince … or blush.
According to the survey, people working in HR were the most likely to hook up with a co-worker at the annual soiree.
Who says HR doesn’t get any love?
That finding may help explain another stat from the survey: Only 9 percent of workers report that they’ve ever been reprimanded for letting loose at a company-sanctioned celebration. But the number one reason for after-party discipline, when it does happen? Messing around with a colleague.
Other findings include a caution about dancing too close to the IT crowd. The survey showed that bunch has the most embarrasing dance moves.
And, apparently, your male colleagues are either party animals or wimps: they are significantly more likely than female coworkers to call in sick on the morning after. The survey wasn’t as clear about the gender of the 10% of workers who cleverly avoided having to make that call … and slept right there at the office.
Well, you’ve been warned.
Here’s hoping everyone has a safe … and uneventful … holiday season!