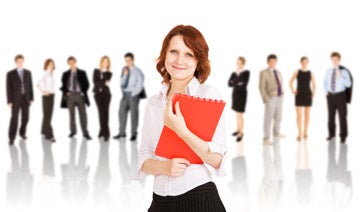 Too many times, people get placed in managerial jobs for all the wrong reasons, and they make all the wrong moves. Funny thing is, most of those who don’t succeed at managing gave off all the signals that they wouldn’t work out, but no one was listening.
Conversely, the people who will be good managers and leaders often send clear signals that they’re ready to take over, according to HR consultant Larry Johnson. If you want a good manager here’s what you should be looking for:
They’re not perfectionists. Good managers expect good performance, but they recognize that people will make mistakes. What’s important to potential leaders is that people gave their best, not that they were perfect.
Perfectionists, on the other hand, can’t tolerate others’ mistakes. The result is that the perfectionists’ department tends to be a turnover machine.
They’re positive. Your next great manager should be the person who sees the good in every situation. That doesn’t mean you’re looking for a Pollyanna who doesn’t recognize problems, but you don’t want someone who only recognizes problems.
They seek feedback. Workers who wrap themselves in self-satisfied cocoons tend to fail as managers. And on the few occasions where they stumble across feedback, they tend to be defensive about it and discourage further feedback.
Someone who’s going to make a good manager is always encouraging others to provide feedback. That’s important because managers usually don’t get enough feedback from workers who are reluctant to oppose the boss. A good boss needs to be practiced in the art of soliciting feedback.
They’re rarely misunderstood. Communicating involves a lot of factors: tone, choice of words, body language. If they’re not packaged correctly, people miss the meaning or, worse, are offended.
You probably know which people in your organization always seem to get their message across loud and clear. They have leadership potential.
They’re good listeners. When’s the last time you heard someone say, “My boss listens to me too much”? Listeners are leaders.
Someone who continually interrupts others or who can’t wait to tell others about “the next great idea” will have problems as a boss.
They’re flexible. If Joan is a good manager, it’s probably because she’s able to adjust to people and situations. If Joe is a bad manager, it’s probably because he expects people and situations to adjust to him.
Managers have to deal with lots of people and lots of situations. Being able to change gears and approaches, according the people and the situation, spells success as a manager.