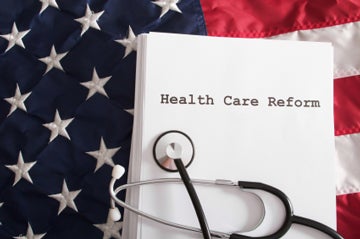 Small employers disappointed that their current health plans will get canned in 2014 due to Obamacare could – added emphasis on could – see those plans get a second life.
In a sobering news conference at the White House, President Obama took the blame for the botched rollout of his signature law and his inability to make good on a promise to allow Americans and small employers to keep their current health plans if they liked them.
“We fumbled the rollout on this healthcare law,” Obama said during the news conference. He also fell on the sword of public backlash, taking responsibility for framing his healthcare reform law as something that would do a number of things that it has failed to accomplish thus far.
“And I think it’s legitimate for them (the American people) to expect me to have to win back some credibility on this healthcare law in particular, and on a whole range of these issues in general,” he said.

Obama went on to promise to continue to work on the law to ensure it delivers on its promises.
The first order of business: Allowing individuals and small employers to keep medical plans that were scheduled to be terminated in 2014.
During the conference, Obama announced another change to the healthcare reform law. He said his administration will be asking insurance companies to allow policyholders to keep their current healthcare plans for one more year, even if those plans fail to meet Obamacare’s standards for essential health benefits.
Prior to this policy change, all non-grandfathered health insurance plans in the individual and small group markets — whether they’re offered through a state exchange or not — were required to cover services in at least 10 categories starting on Jan. 1, 2014.
The 10 categories are:

As a result of these requirements, insurers prepared to cancel policies that failed to offer coverage that met these standards and had begun sending policyholders notices that their plans would be canceled.
Once those notices began to make it into policyholders’ hands, the White House was deluged by backlash from individuals and small employers upset that they weren’t allowed to keep their existing plans — as originally promised by the Obama administration.
Weeks later, Obama’s approval ratings have hit an all-time low and his fellow Democrats have come under fire for over-promising and under-delivering with the healthcare law — hence the policy change.

The policy change, however, doesn’t guarantee that individuals and small employers will be able to keep their current plans. It simply puts the decision in the hands of insurers, many of which are reluctant to bite.
The problem insurers face when it comes to reviving these plans: All along they’ve planned to have those “skinnier” plans canceled. So they’ve prepared — and based 2014 premiums — on the fact that policyholders would have more robust coverage. Those premiums then went through a strict regulatory process.
Reviving the old plans would essentially put policyholders in two “risk pools” instead of one. Insurers had banked on the fact that the cancellation of the older, skinnier plans would cause healthier individuals to enter into policies on the health exchanges with everyone else, helping to keep the cost of those plans down.
Now, however, if those healthy individuals can keep their old plans, they could pass up the opportunity to join a plan in an exchange — essentially throwing off their calculations and likely causing premiums to rise in the exchanges.
Washington state’s insurance commissioner already announced that he would not allow insurers to extend their soon-to-be-canceled policies, while California’s commissioner took the opposite stance and will allow insurers to extend current policies.
If your company’s in the small group market and would like to keep its existing plan, check to see where your state stands when it comes to this new policy or put in a call to your insurer.
This post originally ran on our sister website, HRBenefitsAlert.com.