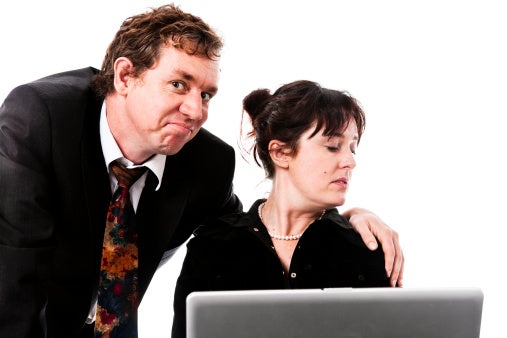 We’ve covered a lot of unbelievable workplace behavior. This case may be the worst.
(Warning: Graphic content ahead.)
Vanessa Hernandez worked for Brand FX Company, Inc., in Pocahontas, IA.
Several months after she was hired, Hernandez began being sexually harassed by a forklift driver named Phil West. West:

Hernandez complained to her supervisor, Rick Yetmar. His response? That Hernandez should go ahead and f–k West.
So Hernandez took her complaint to another supervisor. After she did so, West became verbally aggressive, yelling and swearing at Hernandez.
Hernandez then went to HR to complain. The HR manager said that if it was up to her, she’d fire West — after all, other female employees had complained as well. But no action was taken.

Next, Yetmar began harassing Hernandez, saying he hired her because she was a “real b—h.”
And after Hernandez had a verbal altercation with another employee, Yetmar told her that he’d love to see a little “girl on girl action” and that he’d provide the Jell-O and sell tickets.
Hernandez again complained to HR, this time about Yetmar’s behavior. When Yetmar found out, he screamed at Hernandez for her “childish behavior.”
The harassment continued and Hernandez eventually quit.

Brought back — only to be fired

The next day, the plant manager called Hernandez and and personally asked her to come back to work, promising he’d deal with the harassment.
Shortly thereafter, Hernandez was walking behind a male co-worker in the workplace when another male colleague yelled, “Look out, Joe. She’s going to f–k you with her strap-on.”
Hernandez once again complained to HR, but nothing was done. She then told HR she planned to hire legal counsel and file a sexual harassment lawsuit. One week later, she was terminated.

What the court said