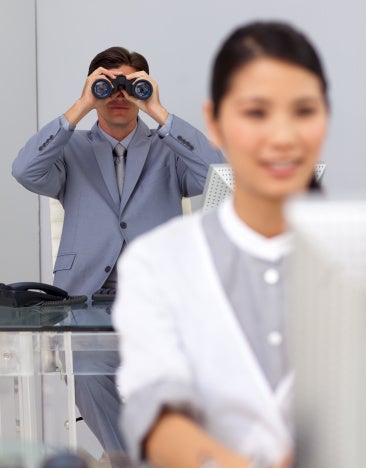 Your employees may hate it, but new research says monitoring employees has some major advantages that companies may not be able to ignore.
Perhaps not surprisingly, employees who are under surveillance are less likely to steal. More interesting: They’re also more productive.
That’s according to new research from NCR, a firm that creates software to monitor employees during point-of-sale transactions.
The researchers compiled two years worth of theft and sales data from 392 restaurants that had installed software from NCR.
Their analysis showed that restaurants that used the software had a 22% drop in theft and a revenue increase of 7%.
Joshua Brustein of Businessweek made a salient point about the researchers’ findings: “Worker productivity edged up, a phenomenon probably tied to the reduction in theft: In a restaurant setting, the only reliable way to make up income lost in a crackdown on skimming off the top is to earn more tips.”

The downside of monitoring?

Of course, there’s a major downside to workplace monitoring: the psychological effect it has on staffers.
Brustein cited another study that found that employees who are electronically monitored were more stressed and “reported higher levels of job boredom, psychological tension, anxiety, depression, anger, health complaints and fatigue.”
Brustein also pointed to a third study that found that workplace surveillance “fosters distrust, conformity and mediocrity.”
The studies raise an important question for companies: Would you be willing to install surveillance to increase revenue and decrease theft if it had an adverse effect on your employees?

One employee’s (overboard) response to surveillance

It’s clear some workers aren’t too fond of being monitored at work. But the way this worker tried to bypass his company’s surveillance policy really put him in a jam.
Gary Bojczak’s company used a GPS to keep track of the location of the truck he drove on the job.
Bojczak didn’t like that, however, so he installed a GPS jammer, which successfully blocked the firm’s GPS.
One problem: It also jammed the new communications system being tested at the nearby Newark, NJ, airport. Bojczak was fired – and received a $31,875 fine.
At least he got what he wanted: No one’s watching him anymore.