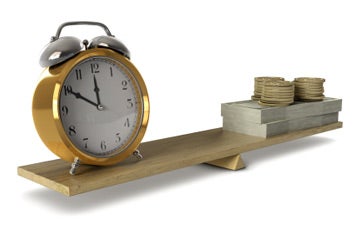 Even though corporate profits are rising, companies haven’t been adding new employees to keep up. Why?
Some employers fear that the recent economic recovery could be derailed, leaving them in a familiar (and unfortunate) position — having to lay off workers, according to a recent USA Today article.
So what are employers doing to meet increased demand in the recent economic upswing? Many are increasing existing staffers’ hours and OT.
In fact, the average weekly hours of private employees recently increased from 34.1 to 34.2, according to the Bureau of Labor Statistics.
Granted, that may not seem like much on the surface — but it’s the third month in a row employees’ hours have risen. It’s also the most employees have been asked to work on average since Jan. 2009.
In addition, employees’ average hourly wages rose seven cents to $22.57.
Giving back
Another reason for the increase in hours — but not employees: Some employers are converting their part-time staffers to full-timers — many of whom are moving back to full-time positions after having their hours cut during the darkest days of the recession.
Other companies want to make it up to their employees for having cut workers’ hours to survive a recent rough patch. Many organizations are offering OT as a way to say “thanks for sticking with us and keeping us afloat.”
Is your company increasing employees’ hours? Share what’s happening at your organization in the Comments Box below.