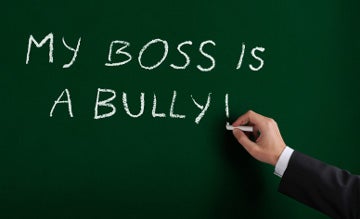 Get ready for a new way for employees to get their companies in legal hot water: workplace bullying.
The New York State Senate recently passed a bipartisan measure that would allow workers who’ve been bullied by a boss or co-worker to sue their employer for damages. The bill now goes to the State Assembly for final passage.
And New York’s not the only state considering such legislation. At least 11 others are doing so, including Connecticut, Illinois, Massachusetts, Montana, Nevada, New Jersey, Oklahoma, Oregon, Utah, Vermont and Washington.
Verbal abuse, ostracism and secret supervision
So just what constitutes “bullying”? Here are a few examples:

Where’s this sort of behavior most commonly found? In high-pressure environments where “making the numbers” is the all-important goal, the psychologists say. It appears that over-focusing on short-term goals and emphasizing individual performance brings out the dark side of human nature.
Given today’s “lean and mean” approach to staffing — and companies’ ever-growing emphasis on maintaining revenue streams — it’s not hard to imagine some form of bullying being a possibility in a wide range of workplaces.
The fighters on the front line of the battle against bullies: your managers. Could be a good time to provide some extra training for supervisors so they can spot the early signals — and maybe save the company from an expensive lawsuit down the road.
For an overview of the issue of workplace bullying, go here.