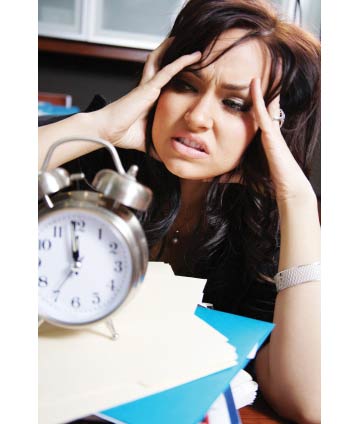 Do your managers know how to spot the signs of employee burnout?

You’re familiar with the effects burnout has on an organization — low morale and lower productivity. Higher turnover. Higher absenteeism. Even higher medical claims.
In a study last year from employee assistance plan provider ComPsych, some 62% of employees reported having high levels of stress — with extreme fatigue/feeling out of control — and 33% report having constant but manageable levels of stress.
The researchers also reported some disturbing trends in what employees see as their work priorities:

Let’s face it: If 22% of your workforce’s No. 1 priority is to simply show up, you’ve got a problem.

So just what is burnout, anyway? A 2001 study defined it clearly: Burnout is an individual’s response to chronic emotional and interpersonal stressors within the workplace.
In an earlier post, we identified three models:
Employees who are physically burned out. These staffers have been asked to do too much, for too long. They’re people like warehouse workers, production staff, custodians, mechanics — folks whose jobs require physical exertion.
Employees who are mentally burned out. Mental burnout often manifests itself in the form of a negative attitude. Burned-out workers tend to have negative attitudes toward everything from their jobs to the company to their co-workers.
Employees who are emotionally burned out. These workers usually have relationship problems – either with spouses, friends, or co-workers – that affect their performance at work.
And a recent study in Spain, published in the online journal PLOS One,  contends the phenomenon takes three main forms:
“Frenetic” burnout: This occurs in the Type A, driven personalities — workaholics whose ambition pushes them to work past the normal limits of human endurance. They’re often extremely successful, but their success doesn’t last. They simply run out of gas.
This variety of burnout is unlikely to be connected to today’s economic climate — workaholics are part of the picture no matter what business conditions exist.
“Underchallenged” burnout: This malaise falls under the phrase we’ve heard so often in the past year or so — “employee engagement.” These workers just aren’t into their jobs. They’re bored, get no satisfaction from day-to-day duties, and don’t see much hope for personal growth.
Although these types, too, are ever-present in the workforce, the recession seems to have spawned an unusually large group of “disengaged” workers.
Finally, there the group that’s simply “worn out.” Not too hard to understand where these folks are coming from: they’re simply overworked, and likely are feeling unappreciated. They’re the losers in the “doing more with fewer people” philosophy a lot of companies have adopted over the past couple years.
The causes of burnout? Here’s a rundown from kissmetrics.com:
Job demands – overwhelming job demands (aka overload). We all know the team member with a stack of papers on their desk, a to-do list that spans two pages, and a panicked look on their face.
Role conflict – conflicting job demands. This is the start-up co-founder who is texting his engineering team under the table while at a meeting with VCs.
Role ambiguity – a lack of adequate information to do the job well. Time to re-think your “VP of Disruption,” “culture leader,” and “anything ninja” job postings.
Lack of appropriate resources – improper training and/or inadequate resources to execute the job effectively. This is the new engineer told to “go for it” with a Dell from 1995.
Lack of social support – lack of social support from supervisors has more of an effect on burnout than lack of social support from co-workers. Ignore and ostracize your employees if you want them to quit.
Lack of feedback – related to all three dimensions of burnout. Feedback is like hard work; if you don’t give it, you’ll never get exactly what you want.
Little participation in decisionmaking – the less involved employees are in decision making processes, the higher the rates of burnout. Time to delegate the choosing of which donuts to buy on Monday morning.

Running on empty: The symptoms

There are markers managers should watch for to make sure employees don’t get overwhelmed, according to Mark Winwood, director of psychological services at insurer Axa PPP’s specialist health services division. He was quoted in a recent story in the British newspaper Financial Times:

The psychological symptoms include an inability to make decisions, a feeling of mental confusion, or unusual aggressiveness. People might also have mood swings, be fearful, lack confidence or feel burnout signs.
Physical warning signs are moving more slowly and changes in weight. Some can’t stop eating; others have no appetite at all. Unexplained aches and pains, such as headaches, backache and shoulder pain may also be signs. As the condition worsens, sufferers can cease to look after themselves, their hygiene might deteriorate and they may stop caring about how they look.
They might stop showing up for social engagements or no longer find pleasure in hobbies they used to enjoy. At the extreme end they may consider self-harm or suicide.

“There is a sense of priority confusion where the priority of work overwhelms everything else and [employees] need to achieve perfectionism in [their] work,” Winwood said.
The fact that burnout rates seem to be growing isn’t a surprise, Winwood added. “People have been living on adrenaline for the past few years,” he said. “After a long time running on empty, all of a sudden they become very, very unwell.”