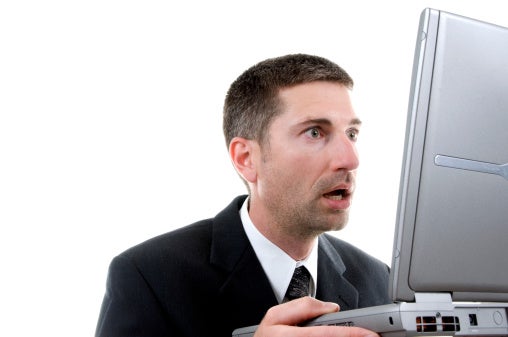 This manager took employee snooping to a whole new level.
Here are the details of the case:
Sandi Lazette worked for Verizon Wireless. As part of her employment, Verizon provided Lazette with a Blackberry, and Lazette was told she could use the phone for personal emails in addition to performing work.
When Lazette turned the phone back into her manager Chris Kulmatycki, she believed she’d deleted her personal Gmail account off of it. She was wrong.
In fact, Kulmatycki began accessing her Gmail account — and did so for the next 18 months. All in all, Kulmatycki eventually read 48,000 of Lazette’s emails, including info about her family, career, financials, health and other personal matters.
Even worse: Kulmatycki shared the info he read about in Lazette’s personal emails with other employees.
Once Lazette eventually found out about Kulmatycki’s actions, she changed her password to prevent further access. Before she did so, he had accessed 48,000 e-mails in plaintiff’s Gmail account.

‘But it was on a company-owned device’

Then, not surprisingly, Lazette sued, claiming violation of the Stored Communications Act (SCA) and invasion of privacy.
Verizon argued that, as manager, Kulmatycki had authority to access Lazette’s emails, and that it was her fault that she left the account on her company device.
The court wasn’t having it. By failing to delete her account, Lazette didn’t implicitly consent to her manager reading 48,000 of her personal emails, the court said — even if it was on a company-owned device.
And, understandably so, the court also allowed Lazette’s complaint of invasion of privacyto  stand — a jury could very well find that Kulmatycki’s conduct was offensive due to the personal and private nature of the emails.
Norah Olson Bluvshtein, writing on the netWORKed blog, had this to say about the case:

… the court’s opinion was interesting in part because of the court’s very strong position that just because the supervisor used a company device, that did not mean there was authorization to read the emails.
Additionally, while the opinion didn’t get into much detail regarding the company’s policy on monitoring of company-issued devices, it is interesting to speculate about whether clear policy language putting the employee on notice that personal emails could be monitored would have changed the court’s mind.  It may be that even the clearest and strongest policy language would not have made a difference, due to the conduct of the overly curious supervisor who read tens of thousands of personal emails for no other reason than his own apparent amusement.

The case is Lazette v. Kulmatycki.