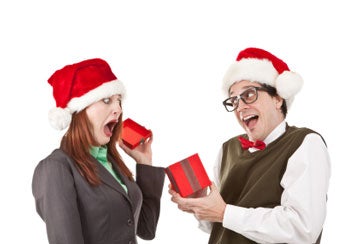 An annual office gift exchange is the type of perk that can give a much-needed boost to workers’ morale and camaraderie at the end of a long year. And it’s also exactly the kind of thing that can backfire big-time.
CareerBuilder recently released its annual holiday survey, which tackled everything from employee bonuses to the “most unusual” office gifts.
Something to remember
Let’s start with the bizarre gifts. The CareerBuilder survey asked more than 5,000 hiring managers and employees to list the “most unusual gifts” they’ve come across during an office gift swap. (It’s worth noting that just 22% of companies said they’ll be holding an office gift exchange this year.)
These were deemed the top 10:

Other findings
The CareerBuilder survey also garnered some less unusual information about employers’ holiday plans. In terms of office parties, 59% of firms say they’ll be holding one this year. However, only one in five workers said they’ll be attending their company’s party.
Also, 46% of hiring managers said employees will receive a holiday bonus — and 40% of the staffers receiving a bonus will get something worth the same as last year or slightly higher, the study found.
This post originally ran on our sister website, HRBenefitsAlert.com.