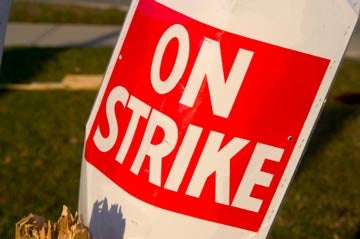 Get the feeling the Obama administration’s pushing for increased union participation? Just wait ’til you hear the latest development.
The National Mediation Board (NMB) — which basically serves as the National Labor Relations Board (NLRB) for railroads and airlines — has just made it easier for employees in those industries to unionize.
The three-member NMB adopted a new rule: If more than half of voting employees approve, the union’s in.
Under the old rule — which had been in effect since the mid-1930s — a union could only be certified if it was approved by a majority of the entire workforce that would be organized. Under that arrangement, workers who didn’t cast ballots were counted as “no” votes.
New appointment is the key
Here’s the backstory: The rule change became possible after President Obama appointed Linda Puchala, a former airline union official, to the NMB earlier this year.
The other members of the board are Harry Hoglander, a former pilot and union honcho, and Elizabeth Dougherty, an attorney and former aide to President George W. Bush.
As you might imagine, Dougherty cast the a dissenting vote on the rule change, which she called “the most dramatic policy shift in the history of the (NMB).”
The shape of things to come

This decision isn’t all that earthshaking — after all, it only directly affects two industries — but it’s pretty clear it’s a harbinger of things to come.
Why? Because of a couple of other Obama administration appointments to the NLRB.
Recently, the president announced he was appointing attorneys Craig Becker and Mark Pearce to the five-member board.
Pearce is a practicing union lawyer. Becker has represented the Service Employees International Union and the AFL-CIO.
Becker and Pearce joined NLRB chair Wilma Liebman to give the NLRB a three-member Democratic majority.
Both appointments were bitterly opposed by business groups, so the two became “recess appointments” — made when Congress wasn’t in session — so neither had to go through the Senate confirmation process.
Bottom line: NLRB hearings aren’t likely to be all that pleasant for employers in the foreseeable future.
Sign of the times

It would have seemed impossible just a few years ago, but the potential for companies to face organizing efforts has increased substantially since the recession hit. Job losses, wage freezes and benefits cuts all tend to threaten employees’ sense of security — and unions offer workers what appears to be a measure of protection.
That’s why savvy companies continue to do their very best to keep the lines of communications open and morale high. Workers who feel like they’re getting the straight story — and are part of a team that will eventually be rewarded for hanging in through tough times — don’t feel the need to turn to a union for protection.