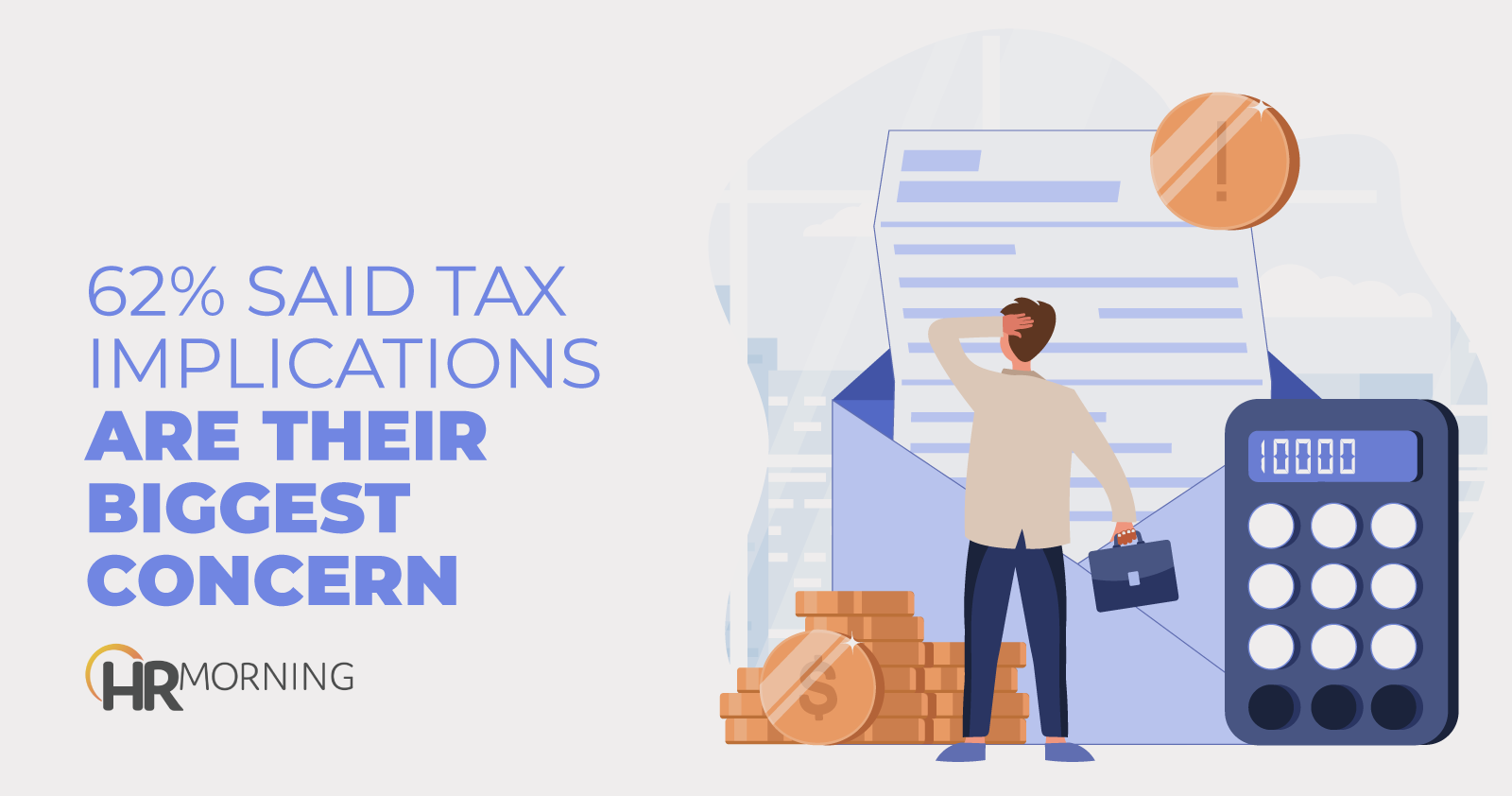 True, being able to hire employees out of state and allow people to work remotely is a huge recruitment tool. But it’s also a huge HR nightmare. All the state-specific requirements companies need to comply with when hiring out of state can have even the most seasoned HR professional’s head spinning.

In part one of this three-part series, we covered out-of-state limitations, the Federal Fair Credit Reporting Act and wage transparency. Now, in part two we’re going to cover the biggest concern most people have after they decide to hire an employee in a new state: tax implications!

In a poll during a recent HR Morning webinar, “Employees working in new states – Are you up to the task?” 62% of attendees said tax implications were their biggest concern once they decided to hire an out-of-state employee. The other concerns were registration requirements (54%), paid leave and handbook policies (46%), payroll issues (46%) and employee agreements (15%).

However, before we get into the major pain point of taxes, registration requirements must be addressed first.

Because once a company has decided to hire an employee in a new state, they need to register to do business there.

“Almost every state has a law that says, if you’re a foreign entity, which means you are not incorporated or formed in that state, you need to obtain a Certificate of Authority in that state in order to do business there,” Adrienne Jack, VP of Legal Product at SixFifty, said during the webinar. “And this means if you’re a Colorado employer and you’re planning to hire an employee in Utah, you need to register to do business in Utah because you were not formed in that state.”

The remote working trend is relatively new in the history of employment law. And states haven’t specifically addressed whether having a remote employee in the state constitutes conducting or transacting business under the state statutes. But right now, the safest approach is to register to do business in that state.

“Often, companies need to obtain a registered agent in that state or find a third party that’s willing to do that for your company,” explained Jack. “But registering to do business is often the first step in the process and a gatekeeping item for a lot of the other registration requirements that companies need to do.”

Once a company’s registered to do business as a foreign employer, the next step is the tax registration requirements. There are income withholding tax requirements, and sales and use tax implications for having an employee in a state.

Prior to 2018, companies only had to pay sales tax in states where they had a physical presence – an office or an employee. But in 2018, the U.S. Supreme Court in a decision called South Dakota vs. Wayfair opened the gates for having a nexus in a state that requires companies to pay sales tax there.

“After that decision, the U.S. Supreme Court said not just having a physical presence, but also having an economic presence, or having a certain number of sales or revenue in that state is enough to trigger the requirement to collect and remit sales tax in that state,” said Jack. “So no longer was it just a physical presence requirement, but it was also an economic nexus requirement. So, either one of those is enough to trigger the sales tax obligations in a state.”

And the economic nexus can be triggered by a certain dollar amount of sales in a specific state or a number of transactions.

This can be a big gatekeeping question for a lot of companies. So, if a company doesn’t already have an economic presence in a specific state and isn’t already collecting sales tax there, having a remote employee in the state triggers the physical presence requirement to collect and remit sales tax in that state.

“For small companies, this can have a significant financial impact on the company’s bottom line,” said Jack. “It’s not just the cost of hiring the employee. It also could be an additional cost of being subject to sales tax in that state.”

There can be other tax requirements, on a state, county or even local level. It can definitely be overwhelming.

Most states have a personal income tax. Therefore, employers must withhold income tax from an employee that is working in that state. Whether that requirement is triggered is state-specific.

For example, an employer who has a remote employee working in Indiana will almost always have to collect income tax withholdings from that employee.

“Currently, eight states have a workday withholding requirement triggered by the number of days in that state,” said Jack. “For example, in Arizona, companies must withhold income for employees, if the employee is there for more than 60 days in a calendar year. So, if you have an employee that is moving to multiple states in a year, this gets very complicated.”

Six states have a wage or income withholding requirement. That means once an employee earns a certain amount of revenue or income in that state, then the company is required to withhold income.

That’s why it’s so important to know where your employees are working and have clear policies on if an employee relocates to a new state. Companies need to be aware of the situation well before they need to comply with the new state laws.

“There can also be reciprocal tax agreements between multiple states that allow companies to not withhold in that state if you’re withholding in a neighboring state or a state with that agreement in place,” said Jack. “Just be aware that this requirement can be triggered very easily, and gets very complicated.”

Another type of implication for having an employee in a different state is employment registration. This requires reporting a new hire to the state, which is often the Department of Labor.

The Personal Responsibility and Work Opportunity Reconciliation Act is a federal law implemented by federal and state agencies. This law requires companies to report their new hire within a certain number of days, which is often 20 days from being hired in that state. This allows states to track where employees are located to help enforce child support payments and to prevent workers’ compensation and unemployment insurance fraud.

This may not seem all that complicated, however, where a company reports it to is different in each state. Your best bet is to contact the State Department.

There can also be registration requirements of the Family and Medical Leave Act.

Some states have paid FMLA leave, and so companies might need to register and withhold from an employee’s income certain amounts to be able to comply with that law in the state.

All states, except for Montana have at-will employment. So, companies who have employees in Montana, need to make sure they comply with the probationary period and only discharge employees for good cause.

There are also minimum wage differences in each state that need to be considered, as well as pay frequency which can differ by county and city. Pay frequency may not seem like a big deal, but it can have an impact on a company’s payroll system. Let’s say your company pays employees once a month, but you have a remote employee whose city requires payment more frequently. How will you handle that?  If you’re hiring an employee or allowing an employee to relocate, you need to be aware of what the pay frequency requirements are to make sure that it works with your payroll system or maybe be prepared to run a separate payroll period for that specific employee.

So, why are companies still choosing to hire in new states when there are all of these different hurdles that they face?

“One of the biggest reasons is the pros outweigh the cons,” said Jack. “The benefits of having that level of talent and retaining high-quality employees outweigh the administrative hurdle of getting these registration requirements in place and complying with the law.”

Stay tuned for part three of this series where we’ll talk about employment agreements and employee handbooks.