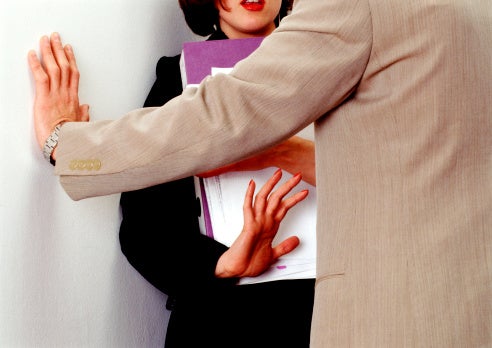 When is putting your hands on a co-worker and preventing her from leaving the room NOT sexual harassment?
When the action isn’t based or motivated by a person’s sex, or anything of a sexual nature.
That was part of a ruling handed down by the U.S. Court of Appeals for the Eighth Circuit in a lawsuit initiated by Loretta Rester, a graphic designer for the Hot Springs Village Voice, an Arkansas newspaper owned by Stephens Media.

Argument got heated, a little physical

Rester’s supervisor was William Elderton, and the two had gotten into an argument over a work project when things got pretty heated.
During the argument, Elderton “slammed his hands on the desk and began screaming and cursing at her,” according to the court documents. Then, when Rester went to leave, “Elderton put his hands on her three times, and physically prevented her from leaving until she began ‘wailing and cussing and screaming and hollering.'”
Shortly after the argument, Rester sued Stephens Media. She claimed that she was a victim of sex discrimination and that the company forced her to work in a hostile environment (a harassment charge).
Stephens asked the court for summary judgment (i.e., to have Rester’s claims thrown out).
The company prevailed on both counts, and the court tossed Rester’s lawsuit.
Here’s why:
No sex discrimination
To prevail on her sex discrimination claims, Rester essentially needed to show two things:

In ruling that her claims failed in both of these areas, the court said: “Rester suffered no termination, did not lose pay or benefits, and her job duties or responsibilities did not change. Thus, she cannot establish a prima facie case of gender discrimination.”
It then added: “… the record contains no evidence … that she received different treatment because of her sex. Rester has not shown that Elderton’s actions were motivated by her sex. Thus, Rester has not established that she received different treatment because of her sex.”
No hostile work environment (harassment)
For Rester’s hostile work environment claim to stand, she had to show:

In shooting down her harassment claim, the court said: “The incident related to a workplace disagreement and the conduct does not denote a sexist connotation.”

It’s not illegal to be ‘rude’

Employers can breathe a sigh of relief after this ruling. It shows that there’s a little wiggle room for workplace disputes to occur without them turning into prolonged — and expensive — courtroom battles.
Of course, it’s never a good idea to scream and curse at, and put your hands on, an employee. But this shows it’s not illegal — assuming it’s a one-time occurrence and, as the court put it, stops short of permeating the workplace.
In conclusion, the court went on to say that for a work environment to be deemed “hostile,” it requires “extreme” conduct “rather than merely rude or unpleasant” conduct.
Cite: Rester v. Stephens Media LLC