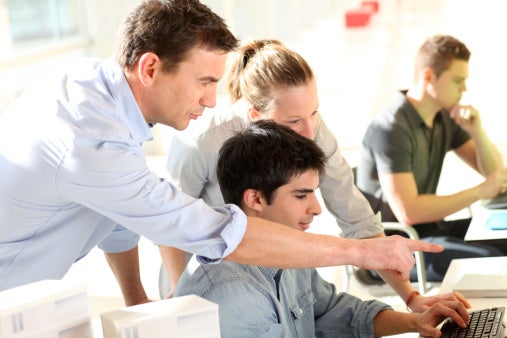 It’s not always easy to keep interns engaged through a whole summer of helping your regular employees do the crucial work to keep the place profitable. Guest poster Matthew Gordon offers some advice and tactics.
________________________________________________________________________
Not all internships can be as exciting as “The Social Network” makes them seem: Most companies don’t try out potential interns by making them knock back a shot for every 10th line of code written or letting them hole up in a Silicon Valley house with a zipline over the pool.
But there’s no reason you can’t keep your interns engaged and excited about their work while they’re with your company. It just requires a little creativity and loosening of the reins.
It’s easy to keep interns interested and engaged throughout the first few weeks of an internship because the beginning is when their enthusiasm is at an all-time high. They’ve bought new dress pants — maybe a snappy blazer — and they’re ready to play the part of a working professional.
During the first week at a new job, interns experience a combination of excitement, nervous energy and anticipation. They’re kept busy processing everything they observe. It’s likely they won’t know what to expect before joining your organization, so everything that makes your business unique — whether it’s a crazy Halloween costume contest or the special delivery of 300 hot dogs — will keep them engaged for a while.
But the initial excitement does wear off — sometimes, as soon as the first week. At this point, daily tasks seem mundane and repetitive, and the “new job” enthusiasm has eroded considerably. The trick is to drum up ways to keep interns’ work fresh so they feel eager about going to work for the duration of their internship.

Although it’s unrealistic to expect your interns to stay excited about what they’re doing 100 percent of the time, you should strive to keep that positive momentum going as long as possible. Here are three things that will help keep them interested.

One of the best ways to keep interns actively involved is to put them on a team. Business students are traditionally grouped together in small clusters in class, so they will thrive in a team environment.
Group assignments are perfect for large projects because they allow interns to divide tasks based on individual skill sets and pick up the slack if others fall behind. These things happen in the workforce, so delegating tasks and working with others are good skills to hone.
Working in groups will also help foster camaraderie, which keeps them happy and engaged. Anything you can do to bring them further into the fold will make them feel like valuable contributors to the organization. Here are a few things you can try:

One of the best intern experiences I’ve been a part of took place with a class of high school interns who are still working with us. We’ve handed these interns a big bowl of responsibility by putting them in charge of the launch promotion for one of our new companies. They’re responsible for finding creative ways to engage customers, and we’ve given them full permission to take the project and run with it as they see fit.
The results have been astounding. They developed a highly successful social media promotion from the ground up, and they pulled in a large group of potential customers in just two weeks. Their project has garnered praise from students, teachers and new customers alike. We’re pretty happy with it, too.
Successful internships should be mutually beneficial: The interns gain a wealth of practical experiences, and your company benefits from their ingenuity. If you keep them busy, give them some responsibility and treat them like real team members, your interns will stay engaged the entire time they’re with you and be left wondering where the summer went.
Matthew Gordon is president and CEO of The Gordon Group, a holding company which manages GraduationSource and Avanti Systems USA.