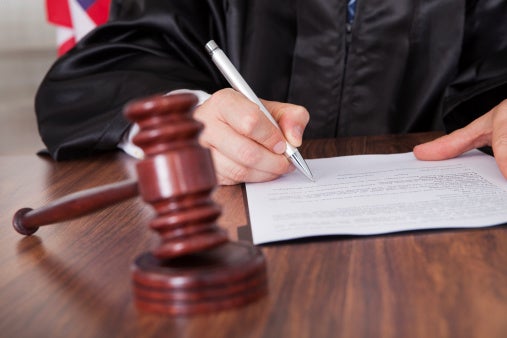 The definition of disability — the kind employers have to make an effort to accommodate — just keeps getting wider and wider.
A recent federal appeals court has ruled that “social anxiety disorder” falls into the category of conditions that interfere with a major life activity. Here’s a look at the case.
In January 2009, Christina Jacobs was hired by Court Clerk Brenda Tucker as an office assistant in the criminal division of the North Carolina Administrative Office of the Courts (AOC).
As an office assistant, Jacobs’s job duties included microfilming and filing.
Less than a month after Jacobs started working, Tucker promoted her to the position of deputy clerk.
At the time of Jacobs’s employment, 30 total deputy clerks worked in the criminal division. Four or five of the deputy clerks provided customer service at the division’s front counter.
The remaining deputy clerks performed other filing and record-keeping tasks, many of which do not require face-to-face interaction with the public.

Panic dealing with the public

Jacobs began training to work at the front counter. She was assigned to work four days a week at the front counter and one day a week microfilming.
Jacobs soon began to experience extreme stress, nervousness, and panic attacks while working at the front counter.
She became particularly panicked when she was asked a question to which she did not immediately know the answer — a common occurrence when working behind the counter.
She attributed these symptoms to her previously diagnosed social anxiety disorder.
On or about May 5, 2009, Jacobs went to a supervisor, Debra Excell, and told Excell that she had social anxiety disorder and was not feeling healthy while working at the front counter.
Jacobs told Excell that she had received treatment (including medication) for mental health issues while in college, but that she was not currently under a doctor’s care.
Excell encouraged Jacobs to seek treatment from the doctor who had helped her in college. After her meeting with Excell, Jacobs went to a doctor and began receiving treatment for anxiety and depression.
Excell subsequently told Tucker about her conversation with Jacobs. Tucker took handwritten notes on Excell’s oral account of her conversation with Jacobs, which included the phrases “too stressful,” “nerve issues,” “anxiety disorder,” and “might have to go back to [the doctor].” Tucker’s assistant placed the notes in Jacobs’s personnel file.
On September 8, 2009, Jacobs sent an e-mail to her three immediate supervisors (Excell, Jan Kennedy, and Melissa Griffin) in which she disclosed her disability for a second time and requested an accommodation.
Specifically, Jacobs requested that she be “trained to fill a different role in the clerk’s office and perhaps work at the front counter only once a week.”
The next day, Jacobs followed up in person with Kennedy. Kennedy told Jacobs that only Tucker had the power to act on Jacobs’s request and, because Tucker was currently on a three-week vacation, Jacobs would have to wait until Tucker returned.
Soon after her meeting with Kennedy, Jacobs forwarded her e-mail request to Tucker. While she was waiting for Tucker to return and address her accommodation request, Jacobs sought to use some accrued leave.
Kennedy questioned Jacobs about why she wanted leave and denied her request. Jacobs’s previous leave requests were not questioned and had always been approved.

Instead of accommodation, termination

Upon returning to the office, Tucker called Jacobs into her office for a meeting. Excell, Kennedy, and Griffin were already in Tucker’s office when Jacobs arrived, where they had just concluded a meeting regarding Jacobs.
Jacobs also saw a copy of her e-mail requesting an accommodation on Tucker’s desk, annotated in someone’s handwriting. Tucker later testified that she had written the notes on the e-mail printout.
Jacobs assumed that the meeting was about her request for an accommodation. Instead, she was fired.
Tucker told Jacobs that she was being fired because she was not “getting it” and Tucker did not “have any place [that she could] use [Jacobs’s] services.”
When Jacobs asked Tucker whether she was being fired “because of the e-mail,” Tucker responded that “it doesn’t have anything to do with the e-mail.”

Jacobs complained to the EEOC and later filed suit against the AOC, claiming disability discrimination. A lower federal court ruled in favor of the agency, saying “social anxiety disorder” didn’t qualify as a disabling condition.
But the appeals court disagreed. It referenced the the Diagnostic and Statistical Manual of Mental Disorders, which describes social anxiety disorder as a condition that “interferes significantly with the person’s normal routine, occupational . . . functioning, or social activities or relationships” — in other words, major life activities.
The judge pointed out that the employer had absolutely no documentation of Jacobs’ alleged performance problems. What’s more, the court said, the employer had failed to enter into any kind of discussion exploring possible accommodation for Jacob’s condition.
So the case now goes back to district court, where the employer faces an expensive, lengthy trial or an expensive settlement.
Case cite: Jacobs. v. N.C. Administrative Office of the Courts.