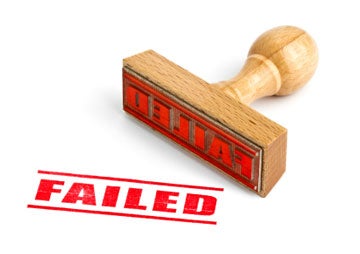 Some firms have come up with creative ways to skirt some of the Affordable Care Act’s labyrinthine administrative requirements. Unfortunately, according to one benefits expert, these tactics aren’t likely to work.
At the 2014 Society for Human Resource Management (SHRM) Conference & Exposition in Orlando, FL, Gary Kushner, the CEO of the HR and benefits consulting firm Kushner & Company, listed some of the more extreme strategies he heard employers say they planned on taking to deal with the healthcare reform law.

Here are five of those strategies – and why Kushner says each is doomed to failure:
1. We’re going to switch our plan year to December 1, to postpone the Shared Responsibility requirement until 2015 or even 2016.
Why it won’t work: Plan sponsors can change their plan year; however, in order to do so, they need a valid business reason for the switch — and “because we want to prolong health reform compliance a little bit longer” just doesn’t qualify as a valid business reason.
2. We’re going to divide our company into separate units or divisions each with fewer than 50 employees so we don’t have to offer coverage under the law.
Why it won’t work: Even if a company is divided into separate divisions, it would still be under the common control of one corporation. The Affordable Care Act calculates full-time employees based on all businesses that are held under common control of a company.
3. We’re going to provide employee-only coverage to reduce our plan participants.
Why it won’t work: While employers don’t have to offer spousal coverage under the Affordable Care Act, they’re still required to extend coverage to dependents up to the age of 26 if they do offer healthcare coverage to employees. Otherwise, they’ll be penalized.
4. We’re going to make a tax-free payment via a health reimbursement arrangement (HRA) so workers can go out to the exchange to purchase coverage.
Why it won’t work: This is a reform strategy a number of firms had planned on utilizing. Unfortunately, the Internal Revenue Service (IRS) won’t allow it. In fact, the feds recently warned firms they could face a potential $36,5000 annual per employee fine because stand-alone HRA plans with set limits (the maximum amount of money the company promises to contribute) violate the Affordable Care Act’s lifetime and annual limits on coverage ban.
5. We’re going to cut employees’ hours so they wind up working fewer than 30 hours per week.
Why it won’t work: Plenty of employers have said they plan to cut workers hours in response to Obamacare’s “Play-or-Pay” mandate. But there’s an inherent danger in this strategy, according to Kushner.
Section 510 of ERISA says that employers can’t take employment-based action against an employee if it would deprive that employee of a benefit he or she would’ve previously received. Kushner says he wouldn’t be surprised if this ERISA reg is cited in lawsuits against firms that reduce workers’ hours to avoid offering healthcare coverage.