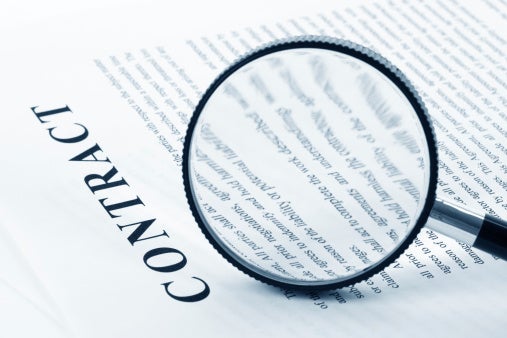 We get that employers want to protection their intellectual property — a big reason to have employee contracts. But adding this clause seems like a bit much.
Staffing agency Robert Half International asks employees to sign an employment agreement that says:

“After termination of Employee’s employment with Employer, Employee shall not indicate on any stationary, business card, advertising, solicitation or other business materials that Employee is or was formerly an employee of Employer, any of its divisions, or any of the RHI Companies except in the bona fide submission of resumes and the filling out of applications in the course of seeking employment.”

In essence, Robert Half is telling employees they can’t market themselves as having worked at the company. The only exceptions are when submitting resumes or applying for jobs.
What’s the point, you ask? Eric Goldman, a professor on intellectual property at Santa Clara University School of Law, summed up the reasoning nicely in his column on Forbes.com:

“… Paragraph 13 seeks to hinder former Robert Half employees from truthfully marketing their expertise. Indeed, Robert Half freely admitted it wanted to prevent former employees from ‘using RHI’s own name and brand to compete with RHI.'”

A typical example of when Robert Half’s obscure contract clause might come into play:
Say you’ve just left Robert Half to take over as the director of recruiting at another staffing firm. The firm’s website lists the credentials and experience of its executive team.
Now, rather than saying, “I spent 20 years at the premier staffing firm Robert Half” (and thus establishing that you really know what you’re doing when it comes to recruiting), you have to say something much more generic like, “I spent 20 years working for a leading staffing company.”
That last statement actually creates more questions than it answers?
As a result, a customer may be less swayed to use your new firm to fulfill he or her staffing needs, increasing the odds the person turns to Robert Half instead.

As Goldman points out over at Forbes, this is not a typical contract clause. But the real question remains: “Is it legal?”
Answer: No, at least not in California, where the clause was recently challenged in a district court.
The court said the clause conflicted with the state’s strict non-compete agreement restrictions and struck it down.
It’s difficult to say how it would play in other states that aren’t as hard on non-competes. But if you ask us, it seems like a bit of an overreach — and like overkill.
Cite: Robert Half International Inc. v. Ainsworth