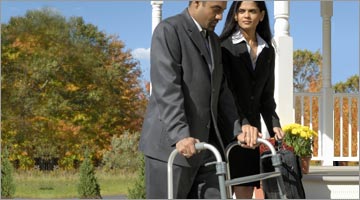 One slip up involving the Americans with Disabilities Act (ADA) can lead to an investigation of all your company’s administrative practices — and can result in huge fines or lawsuits.
The Equal Employment Opportunity Commission (EEOC) isn’t exactly known as a forgiving agency. All it needs is a small crack in your administrative foundation in which to stick a piece of dynamite that will blow open the doors to multiple audits of your federal law compliance efforts.
To help prevent that from happening ComPsych, a provider of FMLA and ADA administration services, combed through a years’ worth of data in its AbsenceResouces administration platform to identify the top three ADA mistakes employers are making that would have the EEOC cops salivating.
They are:

The EEOC isn’t a fan of “inflexible leave” policies — those that mandate employees be terminated once they’ve exhausted a set amount of leave. The EEOC says such policies are illegal because they shut the door on exploring the possibility of offering additional leave as a reasonable accommodation under the ADA.
According to ComPsych, 38% of employers still have policies that create potentially inflexible situations that could spur enforcement action by the EEOC.
However, it’s worth noting that the Tenth Circuit Court of Appeals just ruled that in the vast majority of cases, it’s OK to cut employees’ leave off when they’ve been out of work for more than six months.
In a nutshell, what the court said was requiring an employer to keep a job open for more than six months is almost never a reasonable accommodation (see our breakdown of the ruling).
What the ruling doesn’t do, though, is give employees the green light to immediately terminate workers once they’ve exhausted six months of leave. Even after exhausting six months of leave, an employer must still enter the interactive process to see if a reasonable accommodation exists that would allow the employee to return to work.
It’s only after completing the interactive process, if no reasonable accommodation can be found, should employers take the next step toward termination.

2. Failure to understand the interactive process

That bring us to mistake No. 2: failing to correctly complete the ADA’s interactive process.
The EEOC is culpable in this area as well, since it has yet to issue any sort of comprehensive guidance on the interactive process.
Here’s what we know is required of employers: When it becomes known that an employee has an ADA-covered disability that prevents the person from performing an essential function of his or her job, it’s the employer’s responsibility to “interact” with the employee to determine if a reasonable accommodation can be granted that would allow the person to perform that essential function.
So in a nutshell, you have to learn about the employee’s disability and ask yourself if there’s something you can do — within reason — to help the employee perform his or her duties.
A few things to keep in mind:

3. Not identifying when ADA leave should be granted