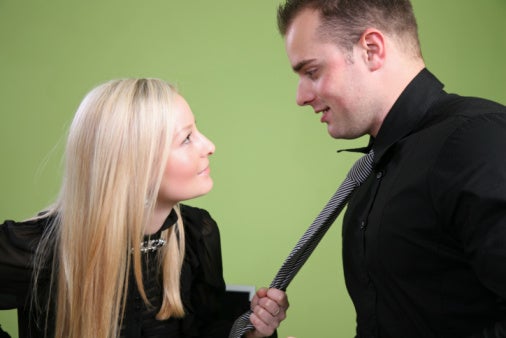 Periodically, we ask three HR pros how they’d handle a difficult situation at work. Today’s problem: A company’s best employees have just been linked romantically — which is against company policy.

Supervisor Jake Miller dragged his feet into HR Manager Stu Capper’s office.
“Why the long face, Jake?” Stu asked.
“What’s our company’s stance on office romances?” Jake asked.
“Office romances are against company policy,” Stu said.
Jake sank into a chair in front of Stu’s desk. “I knew it! Oh, man, I wish I’d never found out about them!”
“What are you talking about?” Stu asked.

“I just found out William and Monica have been dating for almost four months now,” Jake said.
Stu scratched his head. “William and Monica? From sales? They’re some of your best employees, right?”
“No, they are my best employees.” Jake said. “Their numbers usually lead the pack every quarter.”
“How’d you find out about it?” Stu asked.
“They did a really good job hiding it,” Jake said. “But just yesterday someone told me they saw William and Monica together at a restaurant. I talked to William about it and he admitted they’ve been dating.”
“Well,” Stu said, “if they went through all the trouble of keeping it a secret, then they obviously know it’s not allowed. How’s their performance been?”
“Honestly? Both of their performances have cooled recently,” Jake said.
“I’ll have to call them in here,” Stu said.
“Please don’t fire them,” Jake said. “They bring in a third of our business!”
If you were Stu, what would you do next?

What your peers had to say

An office manager from Jacksonville, FL
What she would do: I’d hold a meeting with William and Monica. I’d review our company policy and then see if they had any ideas on how to solve the problem.
We’d probably either have to keep one and let one go, or we’d have to let both of them go.
Reason: Company policy forbids staffers from being in a romantic relationship together, so the two of them can’t continue working there. If we were able to let just one of them go, we could keep the other in sales. Then the company would still be able to benefit from his or her performance.
An HR generalist from Ashland City, TN
What she would do: I’d try to amend the policy so that it only prohibits dating among direct reports. I’d still like to see William and Monica’s numbers improve, however, as we don’t want dating to hinder their impact within the company.
Reason: I’ve never liked blanket statements that forbid dating because they’re always so hard to enforce.
Amending this policy would let us keep William and Monica at our company.
A manager from Mountville, SC
What he would do: Even if they’re the two best salespeople at the company, we’d still need to enforce company policy and make a decision based on that policy. It might mean losing one of them, or even both of them.
Reason: If you’re an HR manager and you let one couple date, then you need to let every other couple date, too. You can’t flip-flop on the issue, because you’ll back yourself into a corner and could get the company in trouble. It’s cut and dried: As employees of the company, William and Monica aren’t allowed to date each other, so they never should have done so.