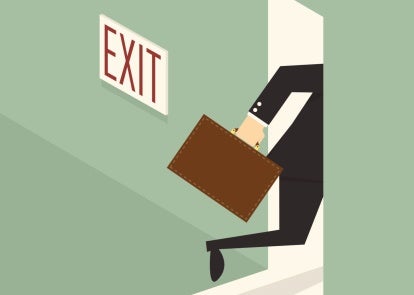 Even though unemployment remains high, employers are reporting there’s a talent shortage in this country. What that means is this: Your most talented employees know other jobs are waiting for them. Are your managers doing enough to keep them?
The old adage — people quit their boss, not their job — is true, according to Eric Jackson, who holds a Ph.D. in management and is the founder of Ironfire Capital LLC, which runs a tech-focused hedge fund.
Translation: While pay and benefits are obviously important, so is liking the person you work for.
Jackson recently pointed out on Forbes.com the most common reasons employees quit their jobs — and guess what … all of them can be blamed on managers.
So it stands to reason you may want to double check that your managers aren’t driving talent away with these detrimental practices:

When companies were shrinking their workforces during the Great Recession, the people they opted to hang on to where obviously the most talented. But that often resulted in the work of the recently laid off getting dumped on those who were considered “lucky enough to keep their job.”
The problems: A lot of the reassigned work was beneath employees’ talent level, and companies forgot to readjust the workloads when they began rehiring again. Worse yet, some companies never got out of the mindset that it was OK to pile extra work on the backs of the best employees.
Managers need to constantly revisit the work responsibilities of employees — especially those with the most talent — to make sure they’re doing work commensurate with their standing in the company.

Not all employees need to be — nor want to be — managed the same way. Poor performers tend to want constant attention and direction — but not top performers.
Chances are your best employees don’t want someone constantly looking over their shoulder. They want to be trusted to get their work done without constant check-ins and direction.
As Jackson points out, another common problem is that individuals who’ve recently been promoted to management tend to want to make sure those who’ve taken over their old jobs are doing things the exact same way they would’ve — after all, that’s what got them promoted.
But this will drive good employees crazy. Give them a chance to make the job their own.

Managers can also be too hands-off — either by not being in the office or by keeping their door closed to those they’re supposed to be managing.
Employees need to know their managers are present and accessible.

4. Not recognizing others’ feelings about personnel moves

Nobody likes feeling overlooked for a promotion, but it happens all the time. Managers hire people they like over the most qualified candidates.
While you don’t want to rob managers of their power to select who they want to fill open positions, you also want to make sure they’re not just promoting their “friends.” Make sure there’s a process managers have to follow, or criteria employees have to meet, before people are promoted.
It’s also a good idea to let employees in on what those processes or criteria are.

Talented employees want to know where they’re headed — or, at the very least, where they can go within the company and what it’ll take to get there.
Make sure your managers are having these conversations with their direct reports on a regular basis.

There are a million things managers can do to create terrible meetings — from letting arguments break out, to letting the conversation stray, to letting them run for hours.
Managers should take the pulse of employees when it comes to the meetings they hold. Do employees dread coming to meetings? Are some employees constantly asking to be excused? Do some appear inattentive?
Find out what it is employees don’t like, and fix it.

Some managers are only interested in protecting their own interests, position or power. These are not leaders.
You want managers who’ll go to bat for their direct reports, and treat them like teammates — not underlings.
It’s impossible for employees to grow if they have a manager who’s constantly beating them down.

8. Failing to put the firm’s future into focus

Almost as much as they want to know where they’re headed, employees want to know where the company’s headed.
This is especially true for talented workers, who tend to be more interested in their long-term prospects than others. If they sense there’s no big picture, or the picture keeps changing, they’ll look to jump ship.