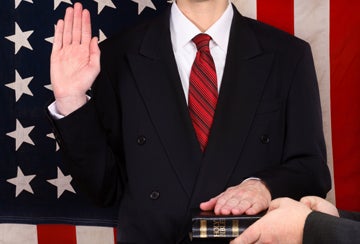 There’s a lot of talk about what Donald Trump could do when he gets into office. Here you’re going to get five bold predictions on what President Trump likely will do that will impact HR professionals and their employers.
Trump has promised the American people a lot in his first 100 days in office, including a full repeal of Obamacare, as well as a cancellation of every “unconstitutional” executive action, memorandum and order issued by President Obama (see Trump’s “Contract with the American Voter“).
If you have no love for the Affordable Care Act or the DOL’s recent changes to the FLSA overtime exemption rule (the latter of which was the result of a President Obama Memorandum), some of Trump’s promises are music to your ears.
But the reality is some of the changes Trump is planning to make will likely look much different when, and if, they’re accomplished than his Contract With The American Voter makes them sound.
Here are five bold predictions for how Trump will change the HR/employment landscape:

1. Overtime rule will be axed

Due to the timeliness of this topic, the list starts with the DOL’s changes to the overtime exemption rule. The new rule, as you know, could raise the exempt salary threshold to $913 per week ($47,476 per year).
Originally, it appeared as though there was little that Trump or the GOP could do about the rule. But the recent preliminary injunction of the rule has changed the game.
What will happen: The Trump administration will likely decide not to dump federal resources into defending the DOL’s position that it had statutory authority to implement the rule and salary threshold increase. That would mean the rule change would die on the vine.
It’s possible the Trump administration will work with the DOL to increase the salary threshold somewhat (even the business groups that filed the lawsuit challenging the rule change said they’d be in favor of a small increase in the salary threshold). But it’s unlikely those conversations would happen anytime soon — as Trump has promised to ease regulations on businesses.
Still, even with the injunction and delay of the rule’s implementation, employers should continue to gear up for compliance. If the DOL does decide to defend its position, and the federal court in Texas that’s hearing the lawsuit rules in the agency’s favor, implementation could happen quickly. So employers will still want to be prepared until it’s official the rule change is dead.
Trump impact level: Moderate.

Trump has promised to “repeal and replace” Obamacare. However, an outright repeal seems unlikely. Here’s why: Repealing the entire law, which has completely reshaped the healthcare system over the past six years, would be chaotic.
For starters, a full repeal would eliminate the healthcare exchanges, as well as the federal subsidies promised to those who purchased health plans on the exchanges. That would result in an estimated 20 million Americans losing their insurance overnight. The Trump administration likely wouldn’t want that blood on its hands. So a slower phase-out seems to be the more sensible approach to take.
What will happen: Within the first 100 days after the inauguration, the Trump administration will unveil a plan that would slowly roll back many of the reforms brought on by Obamacare and replace them with other reforms — like the ability to purchase health insurance across state lines, letting states manage Medicaid funds, the introduction of special health savings accounts and an allowance for people to deduct the cost of health insurance from their personal income taxes. Those are all healthcare reforms proposed by Trump and the GOP.
As a result, much like with the overtime rule, employers must stay the course. While it may sound good on the campaign trail to Obamacare opponents, outright “repeal and replace” would be very complicated and messy. The Trump administration may pull it off, but it won’t happen overnight. Think of the process more as “rollback and re-reform.”
Trump impact level: High (but over several years). Immediate impact: Low.

3. There will be no movement on leave, wages

Trump has promised that for every new federal regulation created under his watch, two existing regulations will be eliminated. He has said that the more freedom employers have from government constraints, the easier it’ll be for them — and the economy — to grow.
As a result, it doesn’t sound as though he’ll be quick to enact any new regulations before he has a chance to gut some of the regulations promulgated by the Obama administration. That means the chances of him moving to impose paid family, medical and sick leave requirements on employers of any size are slim, despite saying that he agreed with Hillary Clinton’s stance that families should have more access to paid leave.
It also means his administration won’t rush to raise the federal minimum wage.
What will happen: Trump will put the issues of employment leave and the minimum wage on the back burner, and let the states decided what they want to do. If he does anything, it’ll be rolling back some of the Obama administration’s moves to get federal employers and contractors to provide more paid leave.
If Trump does create paid leave regulations or address the federal minimum wage, it’ll likely be something that occurs closer to the end of his first term in office.
Trump impact level: Low.

4. The labor movement will take a big step back

The Obama administration wasn’t shy about trying to strengthen unions’ foothold in the American workforce. For the past several years, the National Labor Relations Board (NLRB) has been on a scorched-earth crusade to eradicate any provisions in employer policies that may in any way, no matter how small, prevent employees from organizing. Expect those efforts to take a big step back.
What will happen: President Trump will appoint more employer-friendly members to the NLRB. Over time, those appointees will overturn some of the more controversial, pro-union/pro-organizing rulings the board has made in recent years. This will give employers more freedom to set policies as they see fit to govern their workforces.
In addition, President Trump will roll back some of the pro-union policies and executive orders created under President Obama — like the “quickie election” rule and the “persuader” rule.
Trump impact level: High.

5. There will be more checks and balances for immigrant workers

Central to Trump’s campaign was his stance on illegal immigration. By now you’ve all heard about the “the wall.” But there’s much more to what he wants to do than that.
What will happen: Trump, as promised, will mandate that E-Verify be used to check the employment status of every American worker. In addition, there will be a dramatic increase in both I-9 audits and raids by the U.S. Immigration and Customers Enforcement agency. This means employers, who haven’t already, need to make sure their I-9 processes and documentation are in order — starting today. U.S. Citizenship and Immigration Services just released a new Form I-9, which employers must start using by Jan. 22, 2017.
Trump impact level: High.