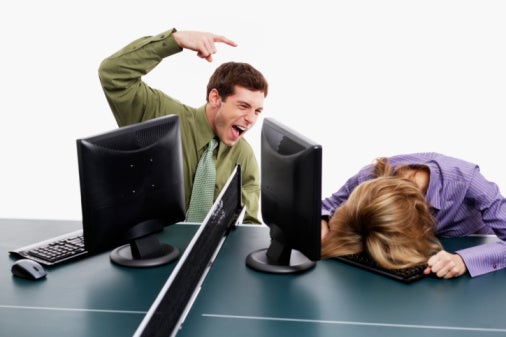 Most people let a curse — or, in some instances, many curses — fly at work on occasion. Usually it isn’t a problem. Here’s an instance where it could be.

Kellymarie Griffin worked for the city of Portland for nearly 20 years when she was assigned to a five-member clerical team at an office in Mt. Tabor.
Each member of the team had a desk in the same small office, so they sat in close proximity to one another on a daily basis. All five members of the team worked together closely, with co-worker Theresa Lareau acting as the team “lead” who gave out the work assignments.
Griffin is “a devout Christian” whose faith is “the most important thing in [her] life.” That became an issue when Lareau began making comments to Griffin about her Christian faith.
For example, Lareau allegedly referred to Griffin as “a wacko” because of her beliefs, and on at least one occasion told Griffin that God was a figment of her imagination and that she was “praying to something that didn’t exist.”
While Griffin explained that she tried her best to get along with Lareau, ultimately their working relationship deteriorated.

Griffin also claimed that there was frequent use of profanity at the Mt. Tabor office, including the use of God’s and Jesus Christ’s names as curse words.
Griffin said that Lareau and other co-workers frequently used profanity in the office, and that this language is offensive to her because of her religious reliefs.
In particular, because Griffin views the profane use of God’s name as blasphemous, the language deeply offended her. While she worked in the Mt. Tabor office, Griffin said that when she heard profanity, she’d tell the speaker that this language offended her.
Most co-workers would make efforts to stop cursing in her presence once they were told of the reason for the offense. Even Lareau may have made an effort to stop using God’s name in vain for a time after Griffin explained that it was offensive to her for religious reasons.
That all fell apart, though, on May 4, 2011, when Griffin let out a loud sneeze. A co-worker, startled, exclaimed “Jesus Christ!”
Griffin, offended by her colleague’s reaction, commented to Lareau that she “objected to profanity of God’s name,” saying that that type of language wasn’t professional, that she found it personally distasteful, and that it violated her religious convictions. She added that she’d file a complaint with upper management if it didn’t stop.
Lareau responded that she was “sick of [Griffin’s] Christian attitude, [her] Christian [expletive] all over your desk, and [her] Christian [expletive] all over the place.” She continued by accusing Griffin of using her religion “for the attention.”

Was it a hostile work environment?

Griffin sued, claiming a hostile work environment — and a court sent the case off to trial.
The court divided profanity into two categories — religious and non-religious — and found that “a rational jury could find that at least some of this profanity occurred because of Griffin’s religion.
The court was quick to add that Griffin may not win:

For instance, it is unlikely that a coworker who used a curse word without knowing that the word offended Ms. Griffin for religious reasons used the word around Ms. Griffin because of her religion. Rather, such a coworker likely used the curse word without contemplating whether it would bother or offend anyone, merely because he or she was in the habit of using profanity. Evidence that the co-worker quickly apologized and refrained from cursing in Ms. Griffin’s presence thereafter would bolster the argument that that coworker had not cursed because of Ms. Griffin’s religious beliefs, although such evidence is not necessary.

Still, Griffin may be able to show that some of this profanity (particularly as used by Lareau) was uttered because of hostility to Griffin’s religious beliefs.
Now the case is off to trial.

Bryan Symes, writing on The Blue Ink of Ruder Ware Blog, had this takeaway for companies:

Management personnel are, in my experience, often reluctant to address profanity in the workplace—not wanting to be viewed as uptight “language police.” This is especially true in work environments where simple expletives are common and are viewed as part of the workplace culture or identity. For those management personnel, the Griffin case is a powerful tool that may be used to persuasively curtail or eliminate workplace profanity. As Griffin illustrates, allowing profanity to continue in the face of communicated opposition (opposition that doesn’t usually come to the attention of supervisory personnel) can have expensive consequences. If profanity could be interpreted by an employee as made “because of” that employee’s protected classification (e.g., sex, race, religion, age, etc.)—it becomes dangerous workplace language, even if to some it’s a simple expletive.

The case is Griffin v. City of Portland.