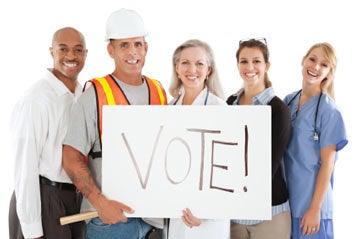 Head’s up! Election Day is coming, and depending on which state your facility is located, you may be required to give workers notice about their voting rights and provide paid or unpaid time off to vote.
California and New York are among the states where employers must post notices in the workplace before Election Day to let employees know about their right to take time off to vote, according to the Society for Human Resource Management (SHRM).
Twenty-one states and Washington D.C. require employers to give employees paid time off to vote. Another six states require employers to provide unpaid time off to vote. The rest of the states don’t address paid or unpaid leave for voting. (Oregon and Washington no longer have voting leave laws because they are “vote-by-mail” states.)

Most states make it illegal for employers to discipline or fire an employee who takes time off to vote.
Even in states where there is no voting leave law, it’s good practice to allow employees to take up to two hours off to vote if there isn’t enough time for them to do so during working hours, Robert Nobile, an attorney with Seyfarth Shaw in New York City, tells SHRM.
The two hours could be from when the polls open or the last hours before they close. Example: If polls are open from 7 a.m. to 8 p.m. in your state, make sure the employee has time off either from 7-9 a.m. or 6-8 p.m.
Need to check the voting laws in your state? Here’s information from the League of Women Voters.