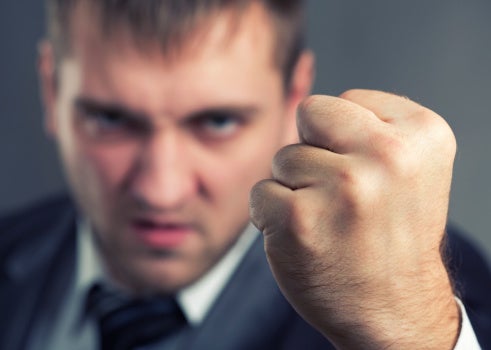 In an attempt to protect himself and his co-workers, a man slugged a customer. As a result, he was fired. While this certainly doesn’t seem fair, was it legal?

The answer, at least according to the U.S. District Court for the District of Maryland, is yes — his firing was legal.
Here’s what happened:
Glenn Altschuld was employed by a CVS Pharmacy in Baltimore as a security/risk management officer. His job was to prevent theft.
One night Altschuld and his assistant approached a customer, whom Altschuld believed was attempting to steal condoms.
During the incident, the customer shouted and cursed at Altschuld and his assistant. It was believed the customer was under the influence of drugs or alcohol.
The customer then made a threatening move toward Altschuld, and Alschuld responded by punching him in self-defense.
Altschuld then asked his co-workers to call the police, and the customer was arrested.
The police later determined that Altschuld acted in self-defense, so he wasn’t charged with any crimes.

Upon returning to work, Altschuld’s supervisor fired him for using force against a customer.
Altschuld then appealed the decision to HR, claiming he was merely acting in self-defense to protect his assistant and his co-workers. But an HR rep told him he had “no right to self-defense in the workplace,” and he’d violated the store’s “anti-workplace violence policy.”
Altschuld then took the matter to court, suing CVS for wrongful discharge.
He said his termination violated a clear mandate of public policy — that individuals and employees have the right to defend themselves.
The court said Altschuld had to show his discharge violated “a clear mandate of public policy” for his lawsuit to stand.
It then said public policy authorizes “the justifiable use of force to defend oneself in one’s home or place of business,” but that only immunized Altschuld from liability for using such force — it didn’t mandate that he use it.
The court then went on to say that it didn’t matter whether discharging him was “fair, justified, sensible, reasonable, or appropriate,” only whether his discharge was wrongful in that it violated public policy.

Bottom line: CVS did nothing to prevent Altschuld from exercising his right under public policy to use force in self-defense, so it didn’t violate public policy.
Rubbing salt in Altschuld’s wounds, the court said public policy doesn’t prohibit employers from discharging employees for exercising a statutory right.
So what does it all mean? Courts give employers a lot of leeway in terms of how they can treat at-will employees. This case is a good example of that. CVS was allowed to terminate an employee even though he did something that was legal — and almost anyone would do.
Cite: Altschuld v. CVS Caremark Corp.