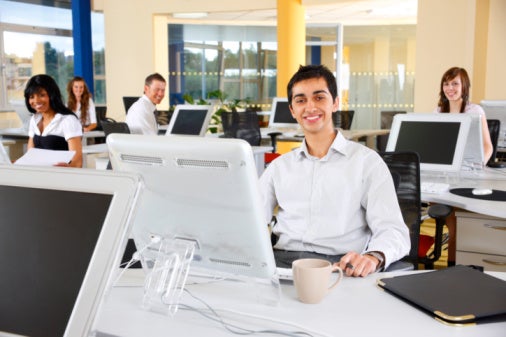 Open collaborative workspaces are the future of the work environment. But are they good for your employees and productivity?
If your company’s still operating out of a cube-and-office work environment, you’re a dying breed: Nearly 80% of companies already have or are planning to set up an open-office design, according to a 2011 survey.
Companies that have embraced the trend range from private firms like Google and GlaxoSmithKline to government agencies like the General Services Administration.
And in theory, the idea makes sense: No high cubicle walls means more collaboration, more interaction with co-workers, potentially faster decisionmaking and a more physically active workforce.
But in reality, open offices can hurt companies as much as they help, according to design firm Gensler. In a recent study, the company noted that a collaboration-friendly environment with no cubicle walls “proved ineffective if the ability to focus was not also considered.”

Why it matters to HR

What’s all this got to do with HR? After all, with hirings, firings and ever-changing employment law, what does it matter to you what your office looks like?
The biggest reason: All those spectacular new hires you’re putting time and money into recruiting and getting oriented with the company will be set loose in an office environment that’s designed to make them fail.
Clearly that’s bad for company performance, but it also could very well reflect negatively on you.
The negative effects don’t stop there. Employees in open-office set-ups get sick 62% more often compared to their colleagues in cubicles, according to a study in the Scandinavian Journal of Work, Environment and Health.
And workers who were moved from a closed-office set-up to an open office complained that they were more stressed and less satisfied according to a longitudinal study carried out by Calgary University.
Productivity, sick leave, employee satisfaction — they all fall under HR’s purview.

How you can help foster creativity

The takeaway: An open office plan is a fine, modern idea — so long as you also include other areas for staffers to focus on.
In fact, take it from Gensler, which found that most workers spend 50% of their time in deep focus, 25% of their time collaborating with other employees and the remaining 25% learning, socializing and other assorted tasks. If you can set your office up to match those numbers, you’ll be in good shape.
Speak with your facility manager and with upper management before you move forward with plans to set up an open office environment. And if you’re already operating out of an open-floor plan with little or no private space, raise your concerns with senior management.