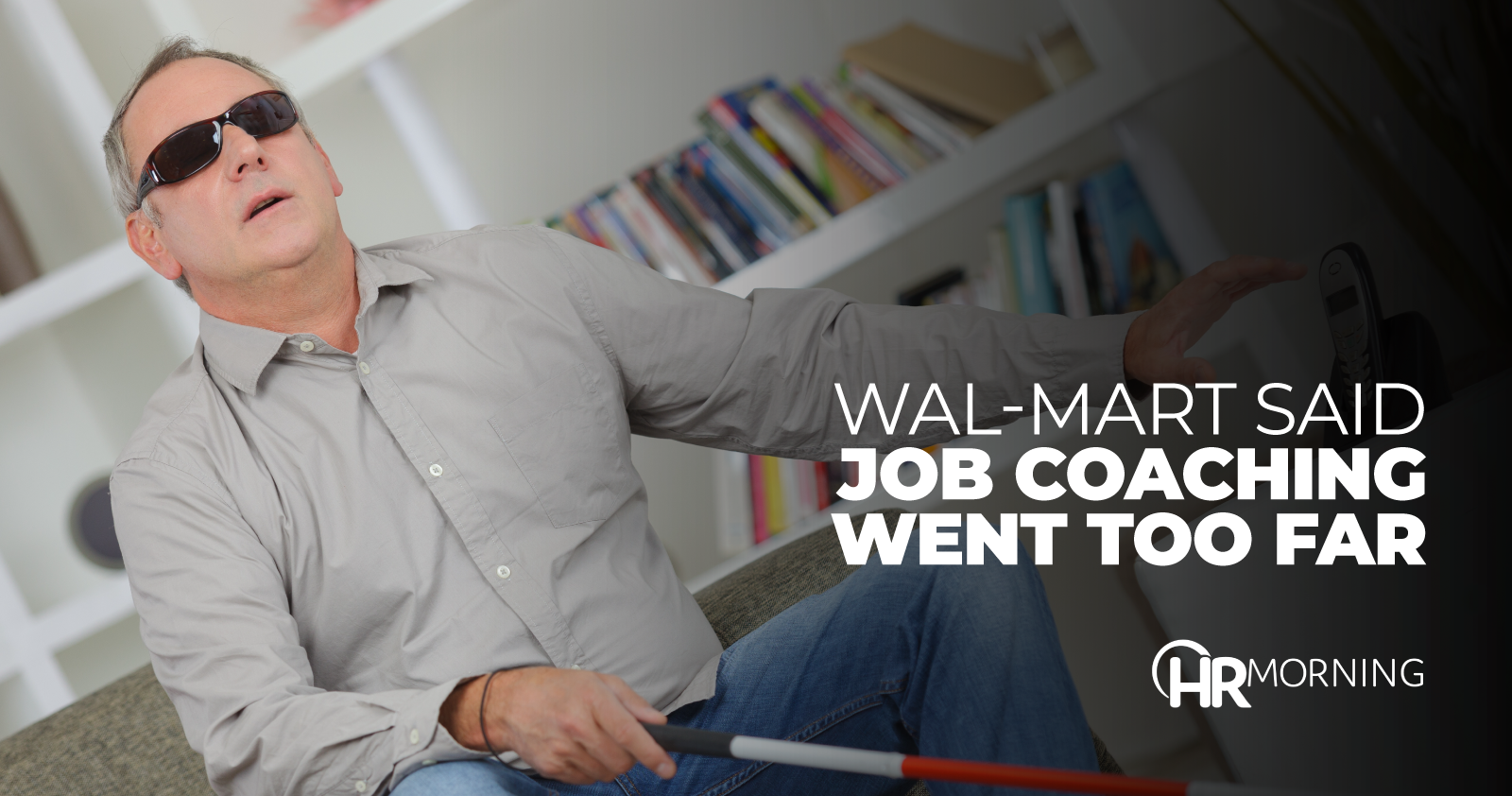 A recent federal appeals court ruling shows the wide range of accommodations employers might have to provide applicants and employees with disabilities. It also shows the steep price employers may have to pay if it is determined that an accommodation should have been provided but was wrongfully denied.

Paul Reina is deaf and legally blind, and he also has anxiety. In 1998, he started working as a cart attendant at a Wal-Mart in Wisconsin.

To help him do the job, Reina was assisted by full-time job coaches that Medicaid funded.

Things apparently went smoothly until 2015, when a shift manager told a new store manager that Reina and his job coach were fighting in the store’s parking lot. But the shift manager did not witness the alleged incident.

The store manager responded by starting to watch Reina at work. Based on his observation, he told the job coach and Reina’s legal guardian that he was worried that the job coach “was doing 90-95% of Reina’s job.”

The store manager then made a bad move: He suspended Reina and told his guardian to fill out paperwork as if Reina had just been hired – even though he had been working there for more than 15 years. The paperwork included an “Accommodation Medical Questionnaire” that needed to be filled out by a physician.

There was a breakdown in communication between the parties, and in March of 2016 Wal-Mart sent Reina a letter and asked him to continue the interactive process of finding an accommodation. But that missive came too late: Reina had already filed an administrative charge of disability discrimination with the Equal Employment Opportunity Commission (EEOC) by that time. In the charge, he accused Wal-Mart of violating the Americans with Disabilities Act (ADA) by refusing to allow him to use a job coach and by ending his employment.

The EEOC sued Wal-Mart on Reina’s behalf, and Wal-Mart defended the suit by arguing that he was unable to perform the essential functions of the job and that a full-time job coach can never be a job accommodation that the ADA requires.

A jury did not see it that way. It ruled in favor of Reina, saying he should get $200,000 in compensatory damages and another $5 million in punitive damages. The trial court reduced the latter number to $100,000 to comply with an applicable statutory cap on damages.

The EEOC was not satisfied with the verdict. After the trial, it asked the court to award about $41,000 in back pay, about $58,000 in front pay, and about $23,000 for tax consequences and interest. It also asked for a three-year injunction against Wal-Mart. The trial court granted the request for monetary relief and denied the requested injunctive relief. It also rejected Wal-Mart’s request for a new trial. Both sides appealed.

The U.S. Court of Appeals for the Seventh Circuit (Illinois, Indiana and Wisconsin) affirmed the trial court’s rulings.

Wal-Mart pressed three arguments on appeal. First, it said the jury impermissibly found that Reina could do the job. It said the court should adopt a rule that a full-time job coach is never an accommodation required by the ADA. Second, it said the award of punitive damages should be set aside because the EEOC relied upon a novel theory of liability. Finally, it argued that a new trial was needed because the lower court mistakenly declined to separate the trial into a liability phase and a damages phase.

The appeals court was not persuaded.

It was up to the jury to decide which cart attendant functions were essential to the job and whether Reina performed them, it said. And there was enough evidence for it to find that Reina was able to perform the job’s essential functions, it found.

The jury reasonably could have determined that neither retrieving motorized carts nor customer service were essential job functions, the appeals court said.

The court next declined Wal-Mart’s invitation to set a rule saying full-time job coaches are never reasonable accommodations. But an accommodation is per se unreasonable only when it creates an inability to perform the essential tasks of the job. That did not happen here, the court found.

The jury had enough evidence to find against Wal-Mart, the appeals court decided.

The court next rejected the bid to undo the award of punitive damages, rejecting Wal-Mart’s contention that the EEOC relied on a “novel” theory to prove its allegations.

It upheld the verdict while rejecting the EEOC’s bid for further injunctive relief.

This case is a strong reminder for employers that when it comes to job accommodation under the ADA, the range of potential accommodations that may need to be provided is very broad. A close-minded, narrow approach is a pathway to legal trouble.

While the duty to accommodate is tempered by the concept of undue hardship, and, as this court noted, “employers need not pay twice for the same work,” it nonetheless encompasses a broad range of potential options. Engaging in an interactive process in good faith with the applicant/employee is the best way to arrive at an accommodation that satisfies legal requirements and enables effective job performance.