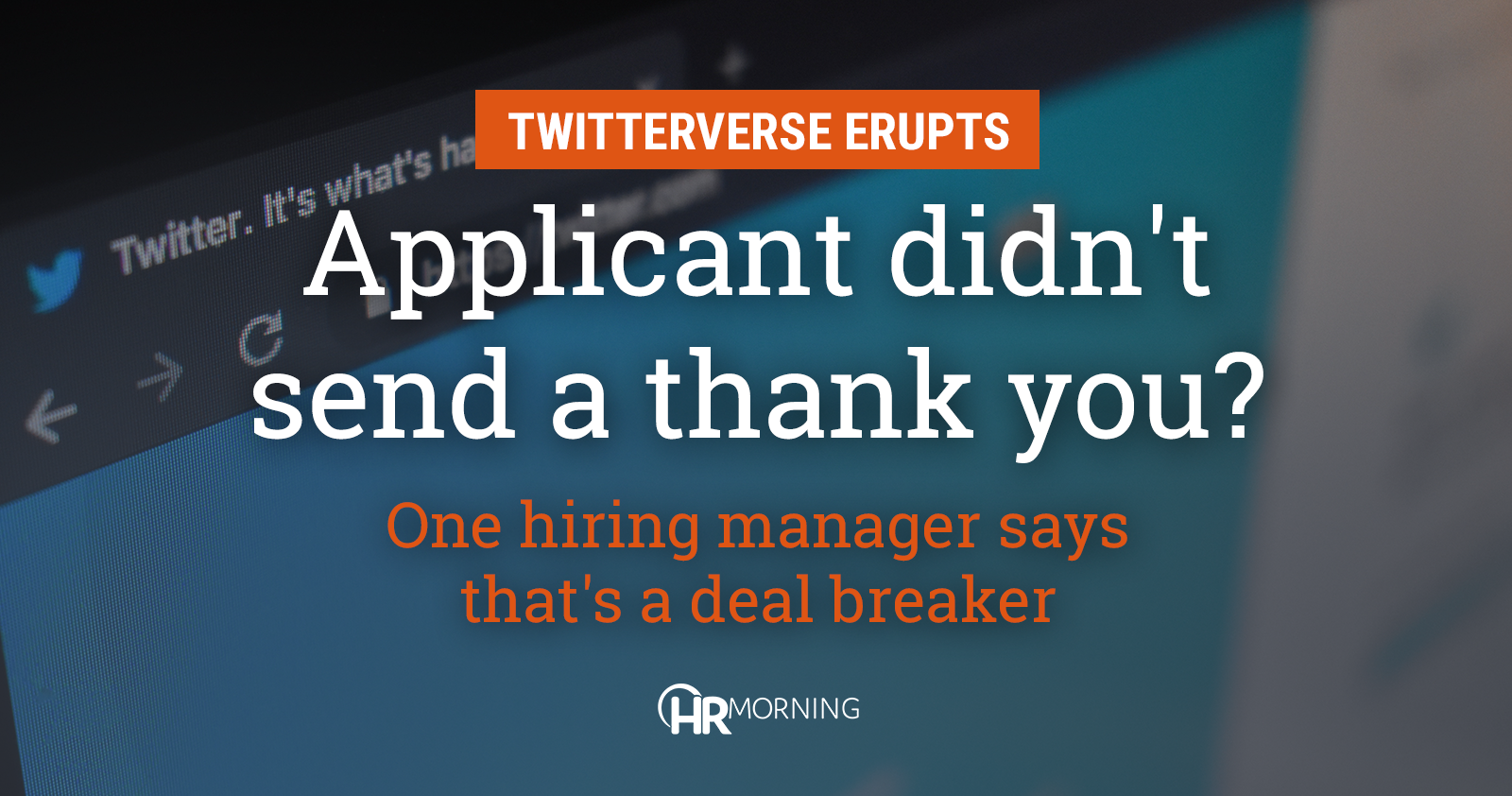 Hard and fast rules about hiring could be hurting your ability to attract talent, especially if they seem arbitrary or exclusionary.

That issue came to the fore in a Twitter thread in early April. Business Insider Managing Editor Jessica Liebman tweeted out a link to her story on the BI website with the long and attention-grabbing headline “I’ve been hiring people for 10 years, and I still swear by a simple rule: If someone doesn’t send a thank-you email, don’t hire them.” If you do, she assures readers in the story, you’ll probably regret it.

Every recruiting and hiring manager has specific traits and personality types in mind when they start vetting job candidates. But many people responding to Liebman’s tweet pointed out  how unconscious assumptions can hurt efforts to find and hire the best and most diverse possible workforce.

Liebman argues that failing to follow this point of etiquette tells her that prospects don’t really want the job. The organization and effort and “manners” demonstrated by hunting down an email address and sending the thank you puts people on her “good egg” list. Liebman reiterated that she stands by her policy to use “the thank-you email as a barrier to entry.”

The twitterverse, or at least one small corner of it, reacted quickly and strongly. The apparent consensus was not positive.

Workplace advice blogger Alison Greene tweeted from her @askamanager account, “Hard disagree. And it’ll discriminate against candidates from backgrounds where they don’t get this kind of job search training, which has nothing to do with skills & ability to excel on the job.”

Software company Glitch’s CEO Anil Dash chimed in with, “The only thing a thank you note represents to me is what the norms are for the social class and cultural background of that candidate. It’s nice to get one, but literally doesn’t factor into the decision at all, and shouldn’t. I’ve been hiring people for 20+ years.”

Others took issue in a sarcastic  tone. Freelance writer and artist Christian Fox’s Twitter persona Goth Ms. Frizzle offered a slightly higher barrier for applicants: “I’ve been hiring people for 100 years and I still swear by this simple rule, if you can’t descend into the labrynth of eternal night and retrieve the silver knife that slit the throat of god as he slept in his garden you’re not getting the job.”

Filtering out the “unwashed?”

Other responses pointed to cultural norms, socio-economic status, or cognitive differences as possible reasons that an applicant might not send a thank you after an initial interview. Many questioned any link between sending a note and ability to do a job well or work well with others. And many tweeters saw the policy as a gatekeeping measure that, intentionally or not, was likely to disproportionately exclude people of color and applicants with less access to career advice.

A lawyer tweeted, “I have non-professional parents and I didn’t learn that thank you notes were an unspoken requirement/tool for filtering out the unwashed until my first year of law school. “

As of April 8, Liebman had not responded directly to any of the thousands of comments her tweet elicited, but Business Insider Global Editor in Chief Nicholas Carlson took the time to tweet out his own take on the article, saying, “I’m surprised how many people are surprised by this excellent advice” and “For their sakes I hope it’s a helpful wake up call.” To a suggestion that his response showed a lack of introspection, Carlson added “Lol, no. I don’t think that’s it.”

As negative reaction to the article and ensuing tweets gathered steam, Carlson later responded more seriously to a tweeted request from @writersofcolor  for “recent staff diversity stats in order to provide some context for this hiring practice?” by stating, “Thank you for this question. With respect to race and ethnicity, 28% of our teammates identify themselves as people of color. Three years ago, this percentage was 20%. Within our newsrooms, 30% of staff identify as people of color, up from 25% three years ago.” Carlson said “For context, according to Pew, 22% of people who work in US newsrooms are people of color. This is in no way ‘mission accomplished’ for us; we continue to prioritize hiring people of color.” He did not address Liebman’s specific hiring record.

Whatever HR pros think of the original tweet — including whether it was just a successful “clickbait” campaign for the publisher — the reaction highlights how important it is to continually re-examine interviewing and hiring procedures for unintended bias that might limit diversity and opportunity.