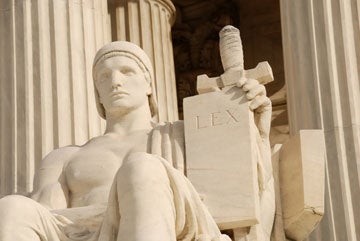 ‘Not a protected class’

In October, Lampley v. Missouri Commission on Human Rights marked another win for the plaintiff. A gay employee argued that his boss discriminated against him because “his behavior and appearance contradicted the stereotypes of maleness held by his employer.” The court found that this type of discrimination is covered under the Civil Rights Act, stating that “an employee has a cause for action for sex stereotyping regardless of his or her sexual orientation.”
Another case reinforced this ruling. In EEOC v. Scott Medical Center, an employee was awarded $55,500 after a supervisor’s frequent anti-gay comments forced him to quit. The company had ignored the worker’s reports of harassment, and the court found this caused the employee emotional distress, and ultimately, the loss of his job.
This is particularly notable because it’s the first LGBT discrimination case that the EEOC has won.
The Supreme Court declining to weigh in on the issue keeps things up in the air for now, but more rulings seem to be going in the employees’ favor.
Because of this trend, you may want to review your harassment and discrimination policies and consider making sexual orientation a protected class.