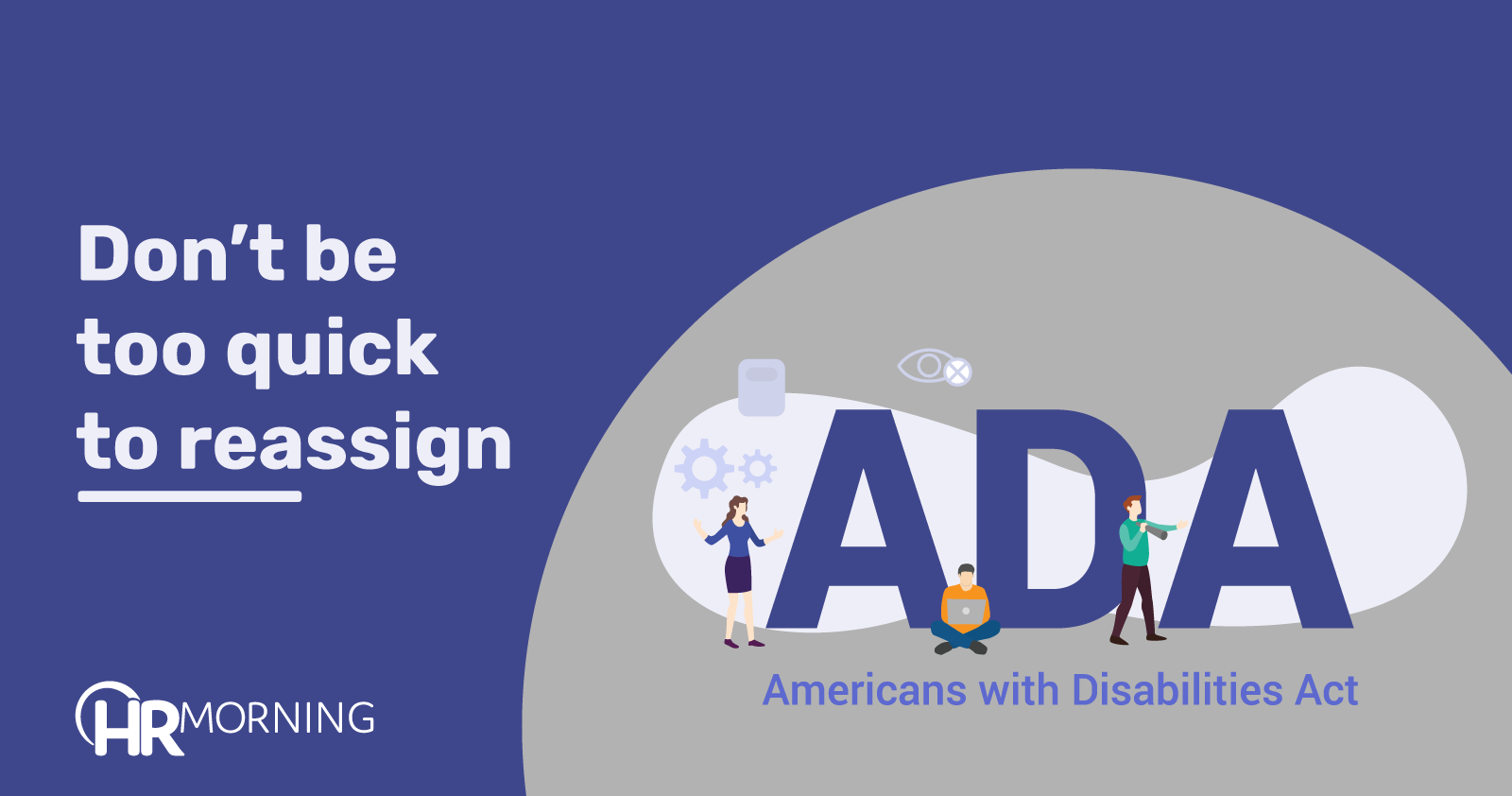 The U.S. Court of Appeals for the Fourth Circuit decided that a city may have violated the Americans with Disabilities Act (ADA) by insisting on reassignment as an accommodation rather than providing an accommodation that would have enabled an employee to continue performing his then-current job.

We know that reassignment can be a form of reasonable accommodation under the ADA.

But does an employer meet its duty to accommodate by insisting on reassignment when there is an accommodation that would enable the employee to stay in his current job?

The court said reassignment is “strongly disfavored” when an employee can do the then-current job with a reasonable accommodation.

Michael Wirtes began working as a police officer for the Newport News Police Department in 1997. He wore a duty belt that carried pepper spray, a gun with ammunition, a taser, a baton, handcuffs, a flashlight, a radio and a body camera battery pack.

In 2006, the belt began causing Wirtes to experience pain and discomfort in his waist, leg and thigh area. In 2011, he told the police chief that he had permanent nerve damage due to the belt. The city granted his request to be assigned to a unit that would allow him to serve as a police officer without needing to wear the full belt.
Wirtes began relocating his equipment to a shoulder holster.

In 2014, a new police chief assigned Wirtes to work as a detective. At first, this did not present a problem because at the time, detectives did not have to wear the duty belts.

Wearing another belt, Wirtes dropped his gun as he executed a search warrant. The city then had him undergo a fitness-for-duty exam to see if he could wear the full duty belt.

The doctor who examined him said he could not. In 2015, the city made two big policy changes. First, it said all officers had to be able to wear the full duty belt. Second, it limited light-duty assignments to a maximum time period of eight months. The city placed Wirtes on light duty. As the eight-month period drew to a close, the city told him that wearing the full belt was an essential job function.

It also asked him to list potential accommodations. Wirtes said he could keep all his equipment to a shoulder holster, as he had done previously. He also said he could add a holster to his ballistic vest. He also suggested that he be exempted from the requirements of wearing a standard uniform and performing patrol duties.

The city rejected those proposals. It gave him two options: Accept a civilian job as a logistics manager or retire. Wirtes retired and then sued the city, saying it violated its duty to reasonably accommodate him under the ADA. A lower court ruled for the city, finding that the city adequately accommodated Wirtes by offering him the civilian job. Wirtes appealed.

The Fourth Circuit vacated the district court’s ruling and remanded the case for further proceedings.

Not an Absolute Rule

The appeals court said that “in the mine-run of cases,” an employer refuses to reasonably accommodate an employee with a disability when it reassigns the employee to a vacant position despite the availability of a reasonable accommodation that would allow them to perform the essential functions of their then-current position.

It said reassignment is a “last among equals” as a reasonable accommodation under the ADA.

The lower court’s decision was vacated, and the case was remanded.