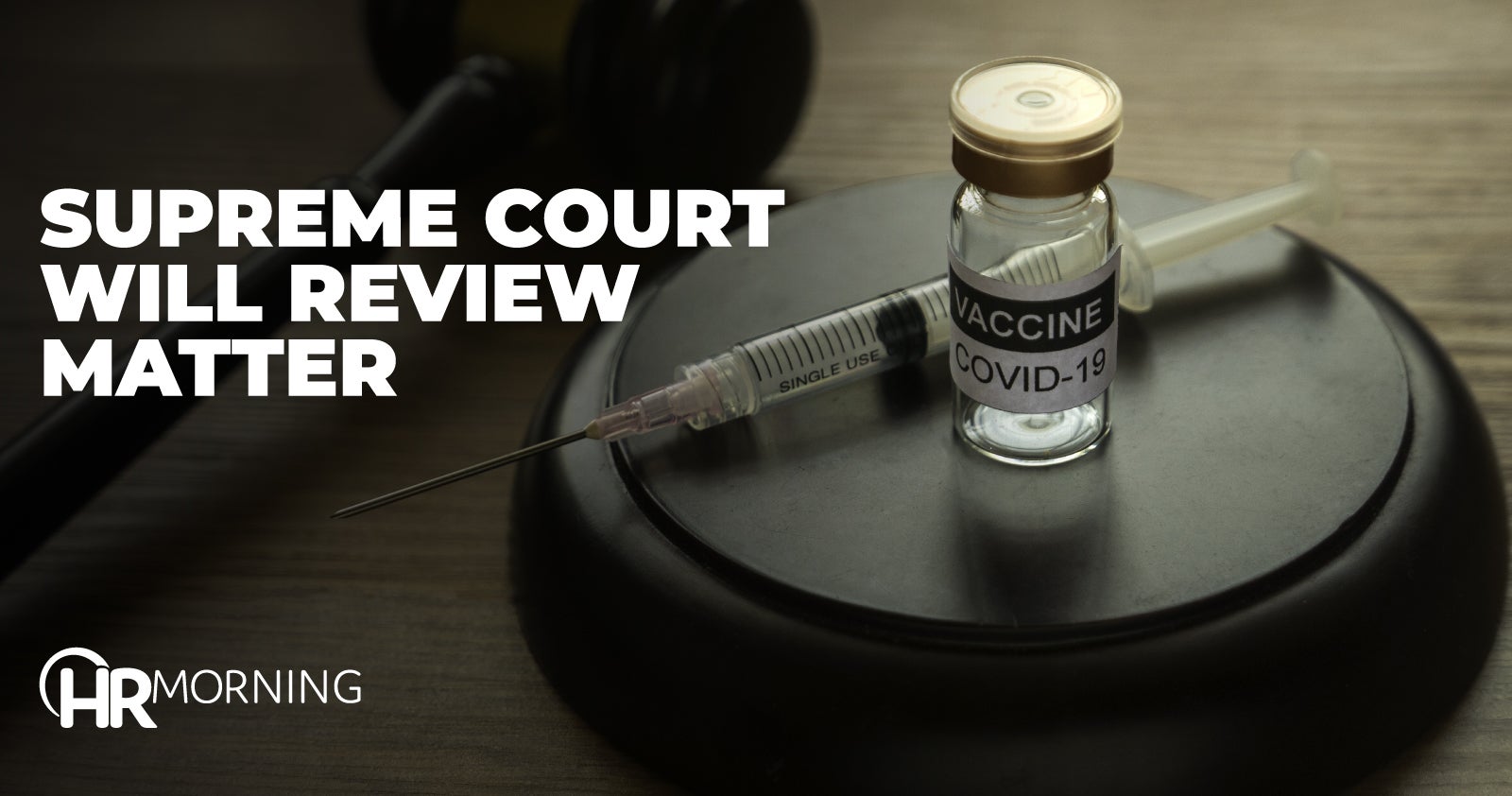 The U.S. Supreme Court is getting ready to weigh in on OSHA’s vaccine rule.

Earlier this month, the U.S. Court of Appeals for the Sixth Circuit lifted a stay on OSHA’s emergency temporary standard relating to a COVID-19 vaccine rule for employers with at least 100 employees.

Those employers must again be ready to comply with the standard, which requires either vaccination of employees on the one hand or weekly testing together with mask-wearing on the other.

OSHA has said it will not issue any citations for noncompliance before January 10 – and none regarding testing requirements before February 9 for employers who are making a good-faith effort to comply.

And in the latest development, the Supreme Court will hold a hearing about the rule.

Don’t Call It a Vaccine Mandate

OSHA initially issued the ETS in early November. Though widely referred to as a vaccine “mandate,” the standard in fact does not require vaccination.

Instead, it gives employers with at least 100 workers a choice: They can require that their employees be vaccinated, or they can require unvaccinated employees to wear a mask and be tested for COVID-19 weekly.

In addition, covered employers can also require unvaccinated employees to work from home. And employees who work only outdoors are exempt.

One day after OSHA released the standard, the U.S. Court of Appeals for the Fifth Circuit issued a stay that barred the agency from enforcing it pending judicial review. About a week later, it issued a written opinion reaffirming the initial stay.

Petitions were filed nationwide in several courts to challenge the ETS. They were consolidated for review by the Sixth Circuit, which lifted the stay on December 17.

The Sixth Circuit explained that four factors are relevant in determining whether a stay pending judicial review, such as the one that the Fifth Circuit issued, is warranted.

As to the first factor, the Sixth Circuit said, “Based on the substantial evidence referenced and relied upon by OSHA, there is little likelihood of success for the challenges against OSHA’s bases for issuing the ETS.”

The appeals court further concluded “that Petitioners have not shown that any injury from lifting the stay outweighs the injuries to the Government and the public interest.” It said the injuries the petitioners asserted, such as that compliance costs would be too high, were “entirely speculative.”

The factors regarding irreparable harm weigh in favor of the government and the public interest, the court added.

It dissolved the stay.

The U.S. Supreme Court has since announced that it will hold a special session on January 7, 2022, to further consider the ETS.

But for now the standard is back on – and covered employers should keep those January 10 and February 9 deadlines in mind.