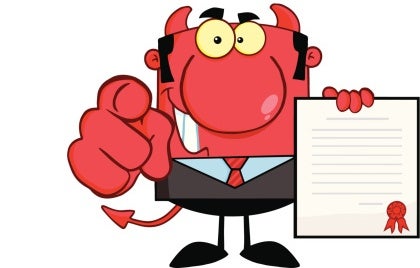 Another day, another court battle centered around a non-union employer that allegedly retaliated against employees who successfully launched a union-organizing campaign. Was giving them sub-par raises of $666 an “unmistakable” attempt to brand the organizers the Antichrist or the Devil.
As strange as the above sentence sounds, it’s the basis for an actual court case that was recently decided by the 6th Circuit Court of Appeals. The case was Lifter et al v. Cleveland State University et al.
Here’s the background: A team of husband-and-wife law professors, Sheldon Gelman and Jean Lifter, claim their employer, Cleveland State University, retaliated against the duo because Gelman mounted a successful union-organizing campaign.

‘Perceived opponents as the Antichrist’

The retaliation took the form of a $666 raise, a raise that was well-below what the couple believed they were entitled to. And of course, the only explanation for that specific raise could be that the number:

“is a universally understood symbol of the Antichrist or Devil — one of our culture’s most violent religious images. Implicitly, but unmistakably and obviously intentionally, [Dean Craig Boise] used his powers to set faculty salaries as an occasion to brand his perceived opponents as the Antichrist.”

Unfortunately for the professors, it didn’t take a court much to shoot down that argument. In its decision, it said:

“After ranking the law school faculty based on objective, self-reported indices of performance, [Boise] divided the faculty into three performance tiers: a $5,000 merit-raise tier, a $3,000 merit-raise tier, and a third ‘catch-all’ tier. … Evidence in the record supports Boise’s account that, at least initially, third-tier faculty members were supposed to receive $727, a number that has no biblical significance. Only after the merit pool was reduced, and only after Boise made several minor equitable adjustments to the merit-raise distribution, did Gelman receive a raise of $666.”

Another problem with the Antichrist claim: The $666 raise also went to some anti-union professors, the court said.
This is one of several employee lawsuits we’ve written about involving the “Mark of the Beast” or 666, so if there’s any takeaway for employers it’s this: Whenever possible, avoid using a figure that has a history of leading to some of the most unusual cases in employment law.