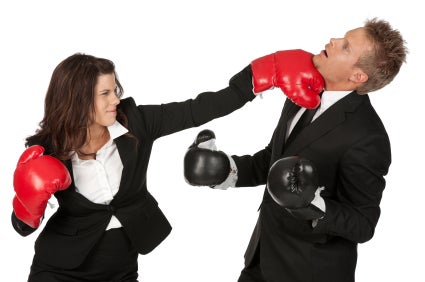 If you get annoyed by your co-workers from time to time, you’re not alone. In a recent survey conducted by Olivet Nazarene University, 2,000 American workers were asked if they ever get annoyed at work. One-hundred percent of respondents said yes.

So what are these co-workers doing to get under everyone’s skin? Respondents listed the following:

Some industries experience certain problems more than others. For example, those in the communication or journalism field tend to deal with gossip in the office more than other industries.
Every respondent had at least one co-worker who annoyed them on a regular basis. Here’s the breakdown:

While the majority of the respondents only had a few irritating colleagues, some had quite a few. The survey also had respondents reveal the first names of the most frequent offenders (sorry Sarah, John, Jessica, Mike, Lisa, and Mark).
For the most part, though, many workers aren’t overly bothered by their fellow employees. Seventy percent were either not annoyed, a bit annoyed, or annoyed by co-workers’ behavior; only 30% were quite annoyed or extremely annoyed on a regular basis. Those in real estate tend to have more colleague complaints while public service professionals have fewer grievances.

The survey found that most employees were driven to deal with the annoying co-workers; 78% of respondents have confronted a colleague about their behavior. Only about 30% confronted the annoying co-worker directly, though; the majority (47%) had another co-worker do their dirty work for them. Twenty percent of respondents went straight to the boss or HR, and 3% somehow managed to get the whole office involved in the conflict.
Fourteen percent admitted to publicly shaming a co-worker for their annoying behavior, and here’s how they did it:

Maybe not too surprisingly, 70% (of all types) of respondents’ confrontations did not resolve the problem.

Are you the irritating one?

It’s possible that you’re annoying your co-workers and don’t even know it. While 71% responded that they have been confronted about annoying behavior before, only 24% reported being aware of their irritating habits.
If you’re a senior employee or manager, though, the survey found you’re 34% more likely to believe you are the source of someone’s annoyance.
When it comes down to it, no matter where you work, there are going to be some people you just don’t mesh with. Most survey respondents only had issues with a handful of co-workers, and only 36% have found new jobs because of them.
But if there are more than 10 colleagues you’re very annoyed by on a regular basis, it might be time to get a new job!