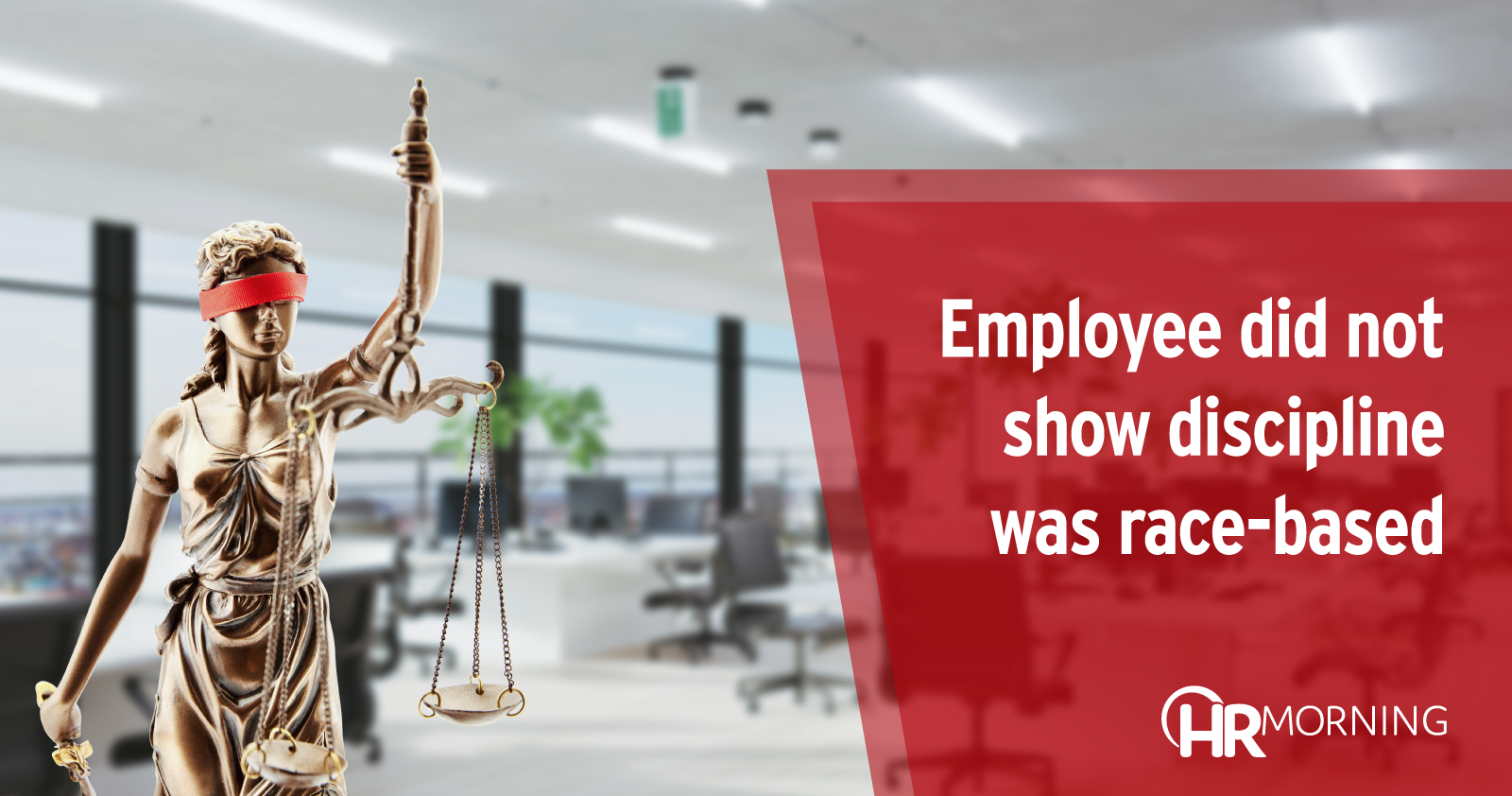 Sophisticated employers are well aware of the critical importance of meting out discipline in an evenhanded and fair manner, and documenting all disciplinary actions carefully.

Employers who proceed carelessly in this regard can easily find themselves facing a claim that the discipline was meted out for an unfair or even discriminatory reason.

Here’s a case in point.

Dawson’s mother is white, and his father is African American.

Things went pretty smoothly until 2013, when Dawson began to amass an eyebrow-raising assortment of disciplinary infractions.

Dawson says that after his white supervisor learned that Dawson’s mother is white, the supervisor directed his anger regarding the supervisor’s daughter’s interracial relationship toward Dawson.

The supervisor issued Dawson a first-step disciplinary action for tardiness in late June of 2013. An attendance log showed he was late at least 12 times between February of 2012 and the time of the discipline.

According to Dawson, an African American employee was late many times and was not disciplined

Dawson also said the supervisor told a white employee to “go around back” whenever he was late so that no one would notice.

In August of 2013, the supervisor disciplined Dawson again, this time for getting into a motor vehicle accident on the job. Dawson received a written reprimand and a two-day suspension for that incident.

Dawson was disciplined again in late September after he caused a water leak while using a backhoe.

After a new supervisor was assigned to him, Dawson’s problems continued.

He was disciplined again when he did not report that a parking garage exit gate hit his vehicle.

Despite all these problems, both supervisors rated his overall job performance as meeting requirements.

In August of 2017, after his supervisor changed again, Dawson was disciplined after he stopped for breakfast before reporting to the site of an emergency gas leak.

And in early July of 2018, he was suspended for five days for falsifying company documents and failing to follow policies and procedures related to paid time off.

In late July of the same year, he was disciplined yet again, this time for disconnecting a video recording device in a company vehicle no fewer than 16 times over a period of about three weeks.

Undeterred, Dawson sued the employer in early August of 2018, alleging discrimination, harassment and creation of a hostile work environment based on race and color in violation of Title VII. He also alleged unlawful retaliation.

At the district court, the employer filed a motion for summary judgment.
Because there was no direct evidence of unlawful discrimination, the court applied a burden-shifting analytical framework when considering the claims.

Under this framework, Dawson had to make out a preliminary claim.

The burden then shifted to the employer to offer a legitimate, nondiscriminatory reason for its actions. If it did so, then the burden would shift back to Dawson to show that the proffered reason or reasons were pretextual.

Applying this framework, the district court found Dawson could not show that the employer lied when it said he was not disciplined based on his race.

It ruled for the employer, and Dawson appealed.

The U.S. Court of Appeals for the Fourth Circuit affirmed the district court’s decision.

It explained that for each time Dawson was disciplined, the employer produced evidence showing that he violated a specific policy of the employer.

In response, Dawson did not meet his burden to show that the proffered reasons for the discipline were merely a pretext for unlawful discrimination, the court said.

The court noted that the employer’s asserted justifications for its actions remained consistent both before and throughout the litigation.

This consistency supported its argument that it did not act pretextually, the court explained.

Dawson did not produce any evidence indicating that the employer was being untruthful, it added.

As to the other employees who allegedly were not disciplined for the same misconduct, the court said Dawson’s argument missed the mark.

One was a single father with childcare issues who always called when he was going to be late, the court pointed out.

As to the other, there was no evidence that his disciplinary record was such that he should have been disciplined just as Dawson was.

A reasonable jury could not conclude that there was pretext, the appeals court decided.

Nor did Dawson show that the employer illegally retaliated against him for complaining about alleged harassment, the court ruled.

The lower court’s ruling in the case was affirmed.