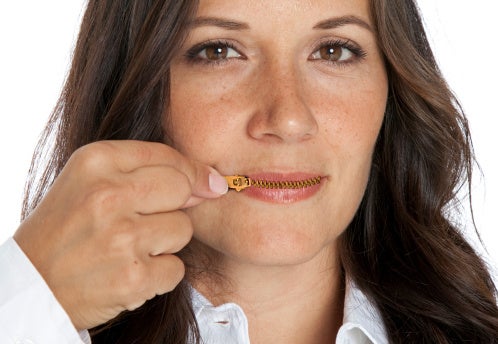 You know when employees request FMLA leave, those conversations have to stick to the facts about what the workers need and why. The problem is, a lot of managers don’t know that — and here’s proof some of their stray comments can cost you dearly in court.
Three employers are currently fighting expensive FMLA interference lawsuits because their managers didn’t stick to the facts when subordinates requested leave.

The real kick in the pants: Two of the lawsuits were filed by employees who’d received all of the FMLA leave they requested — and the courts said their interference claims were still valid. How’s that even possible? Keep reading to learn about the latest litigation trend in the FMLA world.
Here’s what happened in each case (don’t worry, we’ve cut to the chase in all of them) — beginning with the words/phrases managers must avoid when a worker requests leave:

James Hefti, a tool designer, was in hot water with his company, Brunk Industries, a metal stamping company.
Reason: Let’s just say he called a lot of people at work “my b____.”
After he ignored multiple warnings from management to stop using obscenities at work, the company planned to fire him. But it didn’t pull the trigger immediately.
Then, just prior to his termination, Hefti requested FMLA leave to care for his son, who was suffering from various mental health problems.
His manager, upon hearing of Hefti’s request, told him Brunk paid for his insurance — so it expected him to be at work.
When Hefti was fired a few days later, he sued for FMLA interference.
The company tried to get the suit thrown out, claiming his conduct and ignorance of repeated warnings gave it grounds to terminate him. But it didn’t win.
The court said the manager’s interactions with Hefti did raise the question of whether he was fired for requesting FMLA leave, so the judge sent the case to trial.
Cite: Hefti v. Brunk Industries

Lisa Kimes, a public safety officer for the University of Scranton’s Department of Public Safety, requested FMLA leave to care for her son, who has diabetes.
Kimes was granted all the time off she requested. But in a meeting with her supervisor she was told that since the department was short staffed it was “inconsiderate” of her to take time off.
When her relationship with the department soured, she sued claiming FMLA interference.
The department tried to get her suit tossed before it went to trial. It had a seemingly reasonable argument: She got all of the leave she requested, so it couldn’t have interfered with her FMLA rights.
But Kimes argued that her supervisor’s comments prevented her from requesting more FMLA leave – thus the interference lawsuit.
The court sided with Kimes. It said she had a strong argument, so the judge sent her case to trial as well.
Suit: Kimes v. University of Scranton

Judy Gordon was an officer with U.S. Capitol Police when she requested intermittent FMLA leave for periods of incapacitating depression following her husband’s suicide.
But before Gordon used any FMLA leave, a captain in the police department told her that an upper-level manager had said he was “mad” about FMLA requests in general, and he’d vowed to “find a problem” with Gordon’s request.
Then later, when she actually went to take leave, her manager became irate, denied her request and demanded a doctor’s note. He later relented and granted the request.
In fact, she was granted all the leave she requested.
Still, she filed an FMLA interference suit. And, again, the employer fought to get it thrown out before a trial on the grounds that Gordon had no claim because all of her leave requests were granted.
But this case was sent to trial, too. The judge said her superiors’ conduct could have a “reasonable tendency” to interfere with her FMLA rights by deterring her from exercising them — i.e., the comments made to her could’ve persuaded her not to request additional leave time to which she was entitled.
Suit: Gordon v. United States Capitol Police

Based on a thorough read-through of the court documents, each of these employers appeared to have a pretty good chance of winning summary judgment and getting the lawsuits thrown out before an expensive trial — that is, if it weren’t for the managers’ stray comments in each.
These cases have created two important teaching points for HR:

The best way to stay safe: Re-emphasize that managers must stick to the facts when employees request FMLA leave, as well as keep their opinions and other observations to themselves.