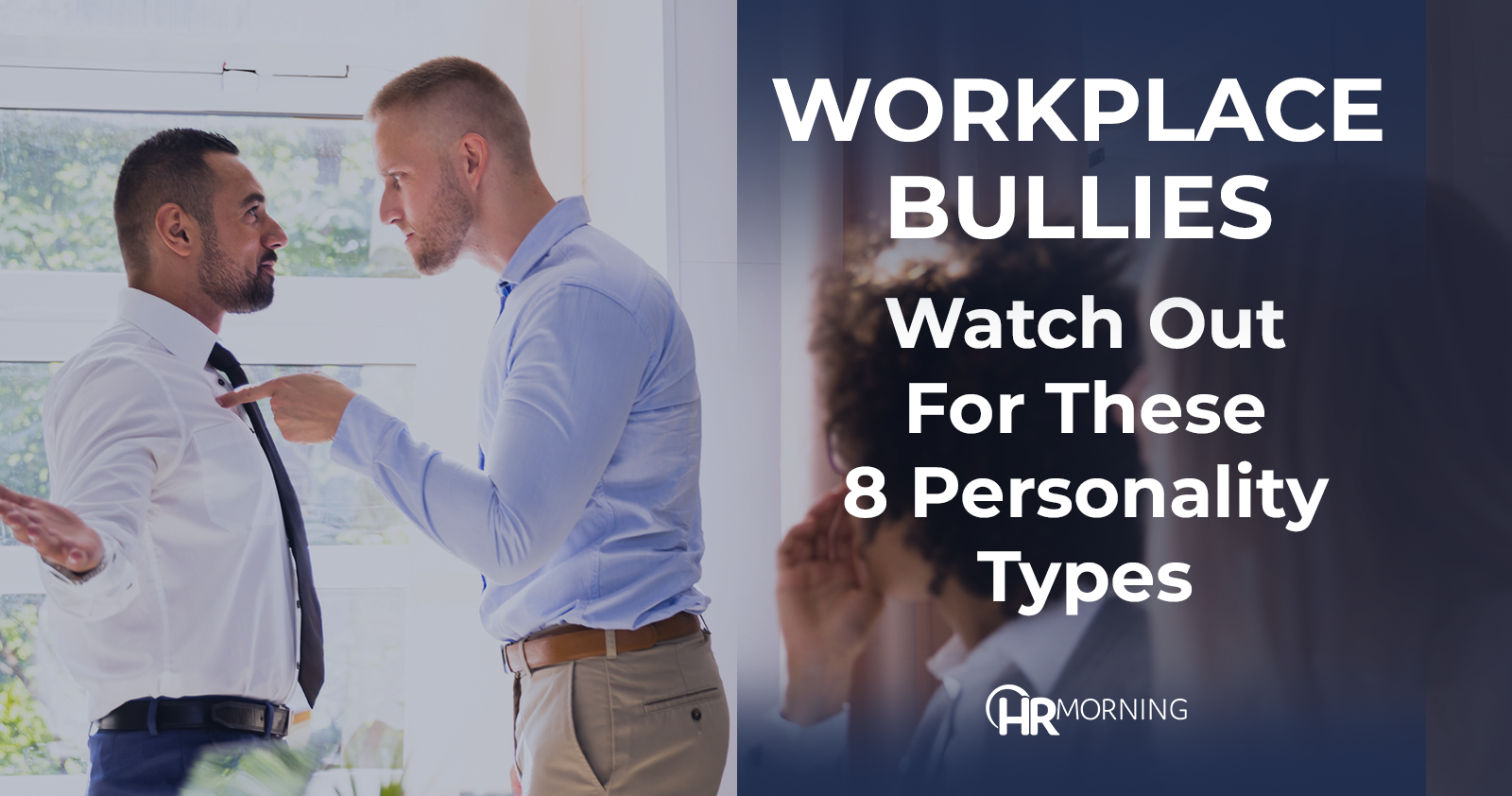 Workplace bullies have always been on the scene. But they’re now being recognized as productivity killers and potential legal threats to employers.

Some researchers claim one in every three employees will experience bullying at work. And the experts say bullying costs businesses more than $200 billion a year due to decreased productivity, increased absenteeism and high turnover.

A partial rundown of the corrosive effects of workplace bullying:

Bullying isn’t automatically illegal. However, behaviors commonly associated with bullying often overlap with other behaviors that are illegal, such as harassment or bias.

The 8 most common bully personalities

1. The Screaming Mimi. This is the most easily recognizable type of workplace bully. Screaming Mimis are loud and obnoxious, and their abusive behavior is meant to berate and humiliate people. They thrive on the notion that others fear them.

2. The Two-Headed Snake. To a co-worker’s face, this employee acts like a trusted friend or colleague. However, when the co-worker is out of earshot, this person will destroy his colleague’s reputation, stab him in the back and even take credit for his work.

3. The Constant Critic. This bully’s goal is to dismantle other people’s confidence through constant – and often unwarranted – criticism. A critic will look for any possible flaw in someone’s work and labors tirelessly to kill that person’s credibility. Impeccable work? No problem: This type of bully isn’t above falsifying documents or creating evidence to make others look bad.

4. The Gatekeeper. Every office has at least one employee who gets off on wielding his or her power over others – regardless of whether that power is real or perceived. Gatekeepers deny people the tools they need – whether it’s resources, time or information – to do their jobs efficiently.

5. The Attention Seeker. This type of bully wants to be the center of the action at all times. They’ll try to get on their superior’s good side through consistent flattery and even come on as kind and helpful to their peers – especially the newer employees. However, if co-workers don’t provide the right amount of attention, these bullies can quickly turn on them.
Attention seekers are often overly dramatic and relate everything to something that’s going wrong in their own lives to garner sympathy and control. These bullies also have a tendency to coax personal info out of new employees – only to use it against them later.

6. The Wannabe. This is an employee who sees himself or herself as absolutely indispensable and expects recognition for everything. But Wannabes aren’t usually very good at their jobs. To compensate, these bullies spend a majority of their time watching more competent workers and looking for areas of skilled workers’ performance to complain about.
Wannabes will demand that everything is done their way – even when there are better ways of doing things. Because they’re automatically opposed to others’ ideas, they’ll do everything in their power to prevent changes to their work processes.

7. The Guru. Generally, there’s nothing wrong with this bully’s work performance. In fact, it’s not unusual for a Guru to be considered an expert in his or her own niche area. What these bullies offer in technical skill, however, they severely lack in emotional maturity.
Gurus see themselves as being superior to their co-workers. As a result, they don’t consider how their actions will affect others, aren’t able to fathom the possibility that they can be wrong and don’t accept responsibility for their own actions. In addition, because these bullies feel as though they’re “above it all,” they don’t always feel compelled to follow the same rules as everybody else.

8. The Sociopath. Intelligent, well-spoken, charming and charismatic, sociopaths are the most destructive bullies of all. Reason: They have absolutely no empathy for others, yet they are experts at manipulating the emotions of others in order to get what they want.
These bullies often rise to positions of power within the company, which makes them extremely dangerous. Sociopaths tend to surround themselves with a circle of lackeys who are willing to do their dirty work in exchange for moving up the ranks with them.

The best defense a company can have against workplace bullying is a clearly worded policy that prohibits any type of bullying behavior.
Here are some components every good anti-bullying policy should include: