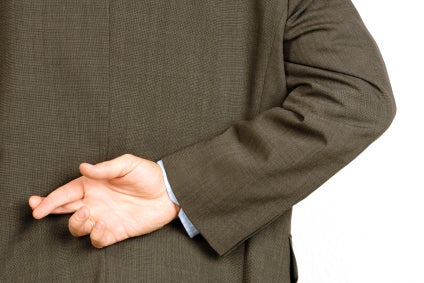 Everyone has those moments when you suspect what a job candidate’s telling you in an interview is a bold-faced lie. But without more evidence, it’s hard to decide if it’s a deal-breaker.

Enter Dr. Lillian Glass, a behavioral analyst, who’s worked with the FBI to unmask body language signals of deception.
She recently authored the book The Body Language of Liars, and revealed the following actions are telltale signs someone’s lying to you.
Granted none of these red flags will stand up in a court of law, but they could give you a reason to dig a little deeper into what someone is saying. (A nod to Business Insider for bringing these to our attention.)

When a person shuffles their feet, it’s a sign that they’re nervous or uncomfortable and want to leave the situation.
This is one of the clearest ways to detect a liar, according to Glass.

If someone makes a sudden head movement after you ask them a question, you may be about to hear a lie.
Business Insider reported that Glass wrote in her book, “the head will be retracted or jerked back, bowed down, or cocked or tilted to the side” just before a liar is expected to respond.

3. Hand on or over the mouth

When a person doesn’t want to deal with an issue or answer a question, they put a hand over their mouth.
It’s a sign they’re trying to close off communication.

Ever seen a lie detector? It’s trying to pick up on changes in a person’s heart rate.
When a person lies, their heart rate and blood flow change, which can cause someone to become a bit more out of breath than if everything were normal — hence, they begin to breath more heavily.

5. Covering up a vulnerable body part

According to Business Insider’s report, Glass has seen this a lot in court: When someone’s testimony would hit a nerve with a defendant, the defendant would cover the front of his or her throat.
Other body parts that may get covered: the head, chest or abdomen.

Liars have apparently heard the phrase “look me in the eye and say it,” too many times. As a result, they try to stare directly into your eyes in an attempt to get you to believe their tall tale.
But because they want to look away, their body may compensate by blinking too much.

Liars tend to be hostile, and when someone gets hostile, they tend to point — a lot.