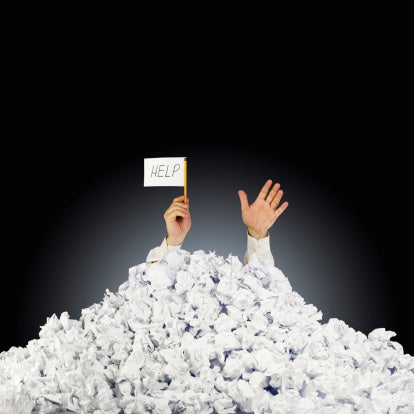 It’s one of the biggest challenges a line manager can face: Keeping engagement, performance and morale high during times of change. And, Lord knows, there’s an awful lot of change afoot in American business today.

Change means different things to different people. To some, it’s perceived as an exciting opportunity, a chance to improve the status quo. But to others – especially those who don’t have all the information about the change at their fingertips – it can represent the frightening unknown, and lead to resistance and anger.
Bottom line: No one likes feeling changes are being forced on them. Yet sometimes that’s exactly how it has to play out.
Here are some strategies your managers can use to get employees on board – including several real-life examples:

Find out how they feel

Times of change are emotional. Many employees may feel sad or concerned about losing the old way of doing things. Others might be worried about shifting responsibilities.
Business consultant and Wharton professor Stuart Diamond says this is why the first step needs to be getting past employees’ emotional roadblocks.
In other words, find out exactly how workers feel about the change. Managers can ask probing questions (not just “yes” and “no” questions) to get at the heart of their concerns, then take specific actions to address them. For example:

Another good idea from communications professional Stephen Ruszkai is to outline the steps being taken and provide a timeline for employees.

When big changes are coming, it’s crucial to tell employees about it right away. Otherwise, the office rumor mill will start grinding — and once it’s rolling, it’s hard to stop.
One manager at a South Carolina firm tries to tell employees about major changes the same day she hears of them.
When people think something’s being hidden, they become wary of what’s going on and are less likely to accept it.
For example, when her company recently went through a transition period, she had to deal with a staff that was worried about their jobs. Knowing there was potential for layoffs, she didn’t want to tell them they had nothing to worry about. She knew that would cost her all her credibility.
Instead, she focused on easing their fears by keeping them in the loop and giving them information on the company’s severance pay policies.

Beat them to the punch

Giving employees notice of possible changes before the changes are definite is the route one North Carolina supervisor takes with his employees.
By beating them to the punch, he feels they get time to adjust.
For example, his company frequently moves people from one position to another. He’s found employees are more likely to accept the transfer if they know it’s a possibility before the decision is final. This gives them time to wrap their brains around the idea.

When change is just around the corner, make a point of giving employees frequent updates.
This is what one HR manager in Indiana believes.
If you don’t keep employees in the loop, they’ll either form their own – often inaccurate – opinion about what’s going to happen next, or they’ll simply feel they’re not important.
So she keeps the updates coming regularly and makes sure employees are comfortable coming to her with questions.

When a manager of a small Wisconsin company recently had to cut costs, she knew her decision of where to save money wouldn’t go over well.
In this case, she was going to have the employees use one machine to do their jobs, instead of each employee using his or her own machine.
She decided to explain the problem to the staff and ask for their feedback. Based on the employees’ concerns, she decided to keep two of the machines, rather than one.
And listening to the employees before making a decision had an extra benefit: There’s a stronger sense of teamwork now at the organization.

Turn it into an opportunity

A Florida company was facing change when the decision was made to expand and hire new managers.
But the organization wasn’t going to hire from within, and at least one supervisor was sensitive to how employees might view that decision.
Instead of ignoring the employees’ concerns, she led several other managers in using the situation as an opportunity to discuss the employees’ career paths.
“We sat down with them and talked about where the company was headed and the skills needed to get there,” she said.
Once the staff saw there were many opportunities at the company remaining for them, they were more accepting of the change.

Show them the big picture

Sometimes all it takes is showing employees how the change will help the company (and them) in the long run.
Case in point: A communications manager in Virginia was able to get employees on board with working a 12-hour day.
She did this by letting the staff know the move would solve the personnel shortage – and keep everyone’s work week at 40 hours.

The most important factor in helping the staff of a Pennsylvania organization deal with change was setting up several meetings to address their concerns, says the company’s CEO.
Employees were being asked to move to a different building. Before finalizing the move, the CEO held several meetings to find out what their specific concerns were. Then she made sure to hunt down the answers.