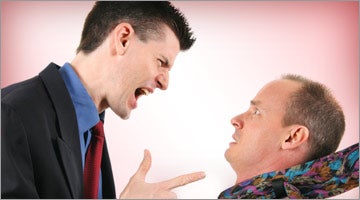 Some of the most expensive discrimination cases against employers in the last year resulted from managers who said the wrong thing at the wrong time — remarks that carried more weight than even the best documentation.
Good documentation is always crucial. But two cases in particular underscore the idea that managers need to be aware that what they say really does matter — and could become part of damaging testimony in court.
Case: Marcus et al. v. PQ Corp.
Total damages paid by employer: $6.2 million
The details: Two employees, ages 61 and 57, got laid off by a Pennsylvania chemical manufacturer. The two dragged the employer into court and charged they’d been targeted because of their age.
The company’s case had a solid foundation. Funding for the two positions had been eliminated, and so there was a strict financial reason — and no discriminatory basis — for the layoff. The ex-employees argued that the company had manipulated salary budgets so that the older employees would be the first to go.
It looked like a stalemate — which is generally good for a defendant employer — until the the court heard testimony that one manager remarked that the company needed “to get rid of some of these old farts.” And another manager had told the two laid-off employees that company needed more  “young blood.”
Those remarks ended up being the tipping point in a ruling for the employees — that the company had “willfully” discriminated.
Case: Blount v. Stroud
Total damages paid by employer: $3.3 million
The details: During an investigation of workplace discrimination, an African-American female employee who had no involvement in the case stepped forward to present her observation as a witness to the alleged discrimination. After that case was settled, the woman who spoke up was fired.
She charged her firing was part of a pattern of discrimination and retaliation by the employer. The employer pointed to documented, less-than-stellar performance and behavior by the employee as the basis for letting her go. Normally, such documentation is a game-saver for an employer.
And it might have been for this employer, until the fired employee pointed to remarks by her managers after she spoke up during the investigation of the other case. Examples: One manager told the woman, “You don’t know what you’re up against.” Another said the company could “cause you not to exist.”
Hearing those remarks, the court ignored the documentation and found in favor of the fired employee.