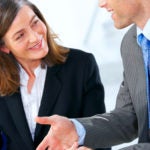 Without intending to, managers of both sexes might be shunting women into supportive roles while lifting men into leadership ones.
That’s what a study out of Stanford University is saying.
Steffen Maier, writing on the TLNT blog, describes how a Stanford research team looked at hundreds of performance reviews and found that women were often described as “collaborative” while more men were “driven.”

Cutting back the bias

The problem often arises at promotion time when past reviews are taken into consideration.
Because women are consistently praised for being good team players, they continue being placed in the kinds of supportive positions management believes they excel in, according to the study.
Men, on the other hand, because they’re more often described as driving company outcomes, are promoted to leadership roles.
Plus, Maier notes that:

There is also a “Meritocracy Paradox.” Even though all of us want to believe we judge on the basis of merit, studies show that isn’t so. In one study, repeated several times, women consistently received smaller bonuses than their male counterparts.

Maier suggests several steps you can take to help your managers avoid this kind of unintentional bias when conducting performance reviews: